Over the past few decades, there has been substantial change in living standards globally. Keeping pace with profound economic and demographic changes will require a significant increase in infrastructure investment.

According to the GI Hub’s Global Infrastructure Outlook, $97 trillion will need to be invested by 2040. Despite current spending trends, infrastructure investment gaps remain. To close this gap—the difference between what is currently spent and what needs to be spent—an additional $15 trillion will be needed.

Significant infrastructure gaps exist in almost all countries, yet there is a scarcity of investable projects. In developing countries, the situation is acute; many are left without basic services such as electricity, clean water, or sanitation. This is in contrast to the increasing appetite of investors wanting to increase their investment exposure in the infrastructure asset class.

It’s clear that the investment required to meet the gap cannot be solely met by the public sector. Private sector investment and expertise needs to be utilised where appropriate. Recognising that not all infrastructure projects are ideally suited to private investment, where the private sector is involved, governments should ensure that value for money is achieved on the basis of clear and accountable incentives and risks assumed by those best placed to manage them.

The appetite from private investors is clearly there. How then can we mobilise private capital to fund public infrastructure projects?

The GI Hub’s InfraCompass confirms that one of the key attributes for creating an optimal infrastructure investment environment is the existence of a transparent and consultative strategic planning framework, backed by a pipeline of projects.

The G20 recognised that there was a lack of a consistent and reliable global project pipeline. A transparent platform that identifies early stage infrastructure projects could help potentially unlock billions of dollars from private investors. 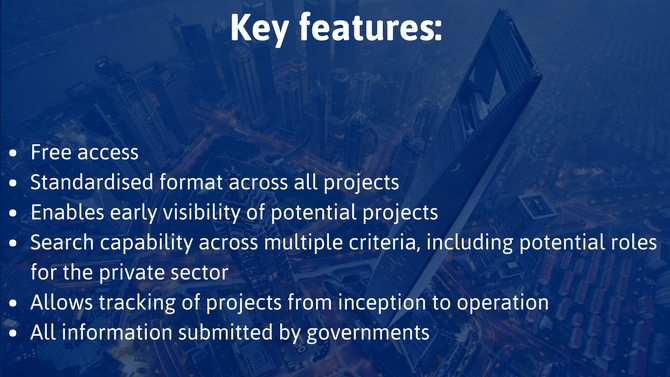 The platform is complimentary to national and sub-national government project pipelines by providing early project identification and signalling the opportunity for early involvement to project preparation facilities (PPFs) and training providers.

The Global Infrastructure Project Pipeline provides global visibility and awareness of countries’ infrastructure plans promoting early market sounding and engagement. It’s also designed to connect to both national and MDB databases, as well as complementing other resources, such as the World Bank’s PPI Database, which lists projects from financial close in developing and emerging markets to SOURCE, a template and training tool aimed at guiding countries through the procurement process.

The Global Infrastructure Project Pipeline will make a substantial contribution to the priorities of the 2018 Argentinian G20 Presidency and the G20’s Infrastructure Working Group agenda. At the launch of the Argentine Presidency of the G20, Mauricio Macri, President of Argentina, clearly articulated that “investment in infrastructure spurs growth and productivity. It also generates better physical and digital access that allows us to take advantage of future opportunities”.

One of the key focus areas of the G20 infrastructure agenda is the greater participation of the private sector and the development of “infrastructure as an asset to channel today’s savings into transport, sanitation, energy and connectivity.”

It has been recognised that there’s an urgent need to invest more in infrastructure. It’s an issue that transcends country borders and political cycles, and affects everyone. Simply being aware of the problem is not enough. A global infrastructure project pipeline will help focus and combine global efforts by governments, MDBs, PPFs, non-government organisations, and other multilateral institutions to work in collaboration to crowd-in private sector involvement and close the global infrastructure gap.