Pensions are poised to power an ESG-driven global economy

The case for institutional investment in infrastructure is being made more forcefully than ever by investors from Blackrock to the Bank of England. At the same time, legislative packages like the European Union (EU) Green Deal ‘Fit for 55’ legal & regulatory package and the United States’ Infrastructure Investment and Jobs Act (known as the Biden Infrastructure Bill) highlight infrastructure’s strong position as an asset class and reflect the growing realisation of policymakers that pension powers can play an essential role in building an ESG-driven global economy.

The co-authors of this article were amongst the original coiners of terms such as infrastructure as an asset class and pension superpowers, and predicted – at the onset of the COVID-19 pandemic – a historic realignment of asset allocation ‘precisely at the moment when ESG is moving centre stage … the smart money is betting on renewable energy, greentech, social bonds, women’s empowerment, employee shareholding, and board diversity: this is an irreversible trend towards [what we call] the Age of Fiduciary Capitalism.’  We believe this convergence of factors has enormous potential to help advance an ESG-driven global economy and become a key feature of the Fifth Industrial Revolution – a revolution that is not just about the ‘meeting of mind and machine’ but also about the meeting of finance and ethics: issues that define what it is to be human, like inclusivity, profit sharing, resilience, and a liveable world.

Pension board members, many of whom are employee representatives and union leaders, are flexing their fiduciary muscles like never before. In many ways, they now embody the interplay between civil society and financial markets, as they were galvanised by the societal changes born out of the pandemic, climate, and social justice crises of recent years, and also in a position to influence what it will look like to 'build back better'.

The rise of private market assets (diversification, quest for yields, and inflation protection) and the mainstreaming of the United Nations Sustainable Development Goals will form mutually reinforcing trends. As Blackrock chairman and chief executive Larry Fink put it in his recently published 2022 Letter to Shareholders: ‘Workers demanding more from their employers is an essential feature of effective capitalism … We are committed to a future where every investor – even individual investors – can have the option to participate in the proxy voting process if they choose.’

G20 governments are relying increasingly on private investment to deliver infrastructure and institutional investors will step up to the plate, doubling their allocation to the asset class in the next five years

A look at the policy planks and economic programs of G20 nations for the next four to eight years indicates that many governments intend to draw on increased private investment to deliver green and socially transformative infrastructure. There is continued awareness that the seven-year stagnation in private investment in infrastructure projects must be addressed, with the G20 continuing to foster public-private sector cooperation toward this end (work the GI Hub actively supports). Large funds from the pension superpowers (the United States, Canada, Australia, Japan, Holland, and the United Kingdom) can therefore play a large role, particularly given they hold a collective 75% of global invested assets.

The investment potential of these large institutional asset owners can be visualised through the Infrastructure and Private Markets Investment Matrix*. Private market assets under management (PM-AuM) should grow by up to 20% per annum from 2022 to 2026, more than double the current rate. The figure below shows this increase and the likely evolution of asset allocation over the next four years. The allocation to (non-listed) infrastructure is shown on the Y axis. Private assets across all sectors (infrastructure, private equity/venture capital, real estate, forestry, and farmlands) are depicted on the X axis. The coloured circles show representative examples of allocation: the ‘Australian model’ is typified by 5% to 12% of overall assets in infrastructure. The ‘Canadian model’ is typified by 8% to 20% in infrastructure, often in direct ownership. Denmark’s PFA Pension represents the ‘typical EU or US pension fund’, with 15% to 18% in private assets, including roughly 1.5% in infrastructure. This is a very common allocation across many OECD countries, and it’s the allocation mix of CalPERS, the US’s biggest pension fund.

The yellow arrows point to the marked increase in investment in non-listed assets that we’re likely to witness going forward. The two northeast-heading arrows indicate the direction likely to be followed by most pension investors in the next four years: raising substantially their allocations to infrastructure and other private assets such as private equity and real estate in similar proportions. 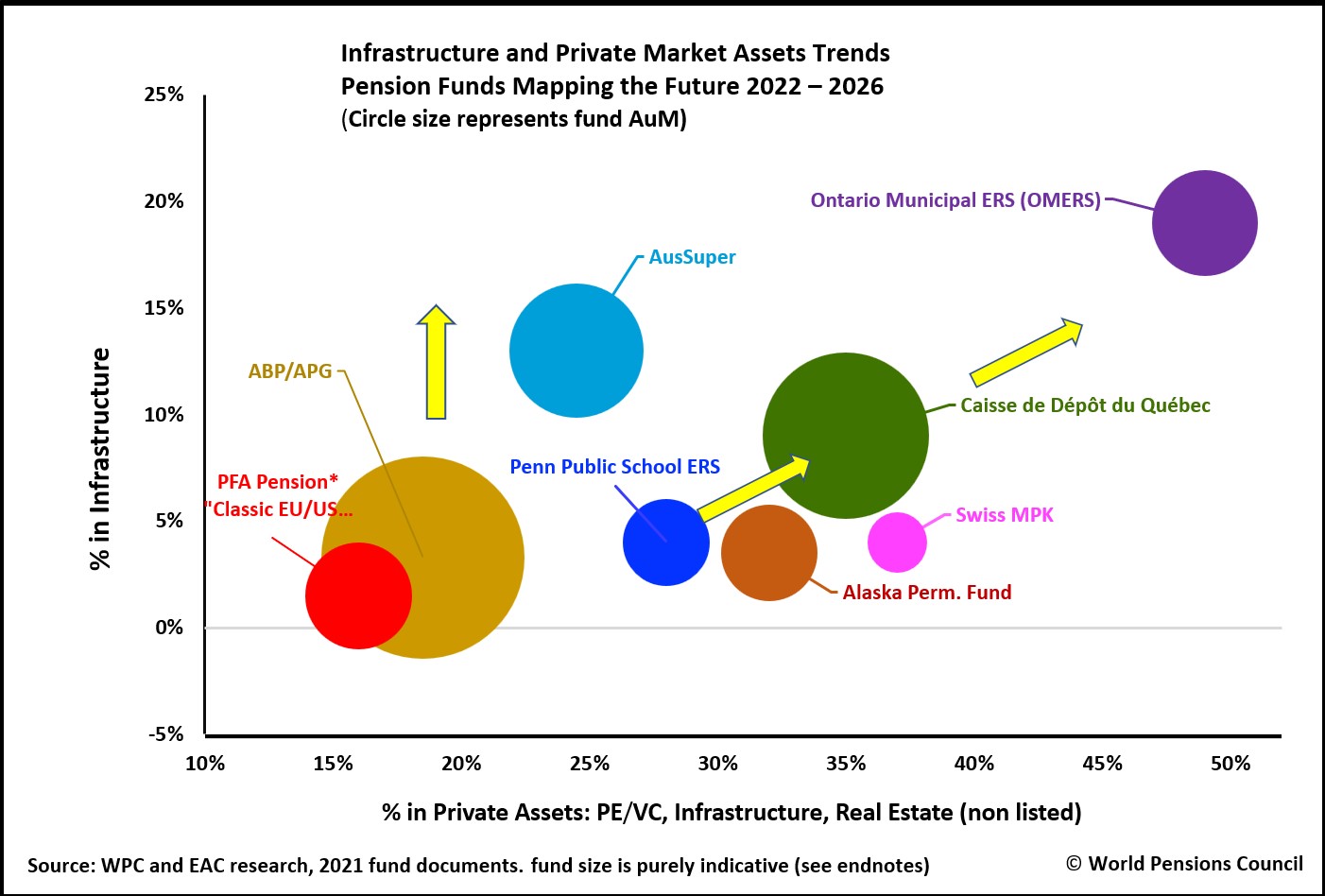 Australia and Canada are two global leaders in infrastructure investment. Both are middle-ranking economic powers with stable legal-political systems, large pension industries, and well managed funds with significant investment in private market assets both domestically and internationally. They invest massively in ports, airports, rail and urban transport networks, energy, and social infrastructure like hospitals and student housing. Another shared feature is the growing governance role played by pension trustees, including employee representatives (the ‘fiduciary capitalism’ mentioned above).

Not coincidentally, both countries are at the forefront of investment in renewable energy, clean technology, digital infrastructure, artificial intelligence, and biotechnology: the foundational sectors of the Fifth Industrial Revolution. In some other countries, some of these sectors and industries are still perceived as excessively ‘illiquid’ or ‘too risky’ for pension investors. Such anxieties are understandable, but can be surmounted with five policy measures:

As we move to a world of durably higher interest rates and greater focus on government debt, policymakers will need to rely more than ever on pension capital. Hopefully, this will make the above policy measures more likely to be adopted.

The Hon. Nicholas John Sherry is the former pension minister of Australia (Minister for Superannuation) and one of the fathers of the ‘Australian pension miracle’.  Nick Sherry is the cofounder of the EU ASEAN Centre, Singapore Economic Forum, which he chairs, and chairman of the board of Household Capital, a leading Australian fintech providing home equity retirement funding and longevity income. He was educated at the University of Tasmania (BA Classics & Political Science) and is a fellow of the Australian Institute of Superannuation Trustees and a graduate of the Australian Institute of Company Directors.

M. Nicolas J. Firzli is the director the World Pensions Council, a global think-tank and asset owners association. Mr. Firzli is co-chair of the World Pensions Forum held annually in a G7/EU capital and coordinator of the G7 Pensions Roundtable held on the sidelines of the G7 Summit. He is a graduate of Canada’s McGill University (Statistics & Economics), an alumnus of the HEC School of Management (MBA) and the University of Paris Law School (LL.M.).

*All data visualised here are based on World Pensions Council and EU ASEAN Centre proprietary research reflecting notably (but not exclusively) annual reports and quarterly investment updates as of Q3 2021 for a selected sample of significant pension investors, fund AuM (bubble size) being purely indicative. The first version of the Infrastructure and Private Markets Investment Matrix (2014) was designed jointly by Nicolas Firzli, WPC, and Dr. Joshua Franzel, MissionSquare Research Institute.

Written by
Hon. Nicholas John Sherry, Former Minister for Superannuation in Australia, Co-founder and Chair of the EU ASEAN Centre at Singapore Economic Forum and Chairman of the Board of Household Capital and M.Nicolas J. Firzli, Director of the World Pensions Council and Co-Chair of the World Pensions Forum
Attachments & Related Links
Environmental, social, and governance
Subscribe