Vertiports and the Smart Grid

“Vertiports” are platforms used by electric aerial vehicles (see also the Unmanned Aerial Vehicle for Passenger Travel use case) for vertical take-off and landing. They are designed not only as stations, but as part of larger multi-purpose hubs for renewable energy, data, and public amenities.

Vertiports are composed of an operational platform for rotorcraft manoeuvres and a connected building for associated technical equipment (such as charging infrastructure). There are various types of vertiports ranging from former heliports, which are retrofitted with electricity charging devices, through to purpose built rotating vertiports. In the images above, three types of rotating vertiports are shown: for a single vehicle and single reception zone on the left, for a single vehicle with three reception zones in the middle (enabling higher capacity), for two vehicles and four reception zones on the right (again, for higher capacity).

Vertiports are designed to form part of existing or as part of completely new hubs. For existing hubs, the vertiports can be integrated without adding significant additional stress to the existing infrastructure. They can be integrated with rail or bus stations or airports (see also the Smart Stations and Smart Airports use cases) to complement or complete the transport chain or added to schools/universities, healthcare facilities and businesses, etc. without requiring additional ground infrastructure to be built (e.g. no rail tracks).

Potential benefits of vertiports vary according to the country/city their existing or developing transport networks:

In both cases, unmanned air transport would offer a select service to a portion of the population, enabling them to quickly reach a destination and avoid congestion. In that sense, the vertiports would not require additional extensive infrastructure works to be developed and could offer an additional transport link.

Vertiports rely on the principles of shared services using existing assets to operate. They represent an opportunity to develop connected services by integrating energy and transport in urban areas. Therefore, they need to be designed in a way to be implemented within existing and new building structures. In the future, they could directly integrate with any new essential service facilities being built (schools/universities, healthcare facilities, businesses, etc.).

Legislation and regulation: Most countries have strategies but not developed regulations to integrate vertiports, from an aerial point of view or from an energy perspective. Specific governance must be developed to address UAV urban air travel regulations and the resulting vertiports operations regulations and safety standards.

Transition of workforce capabilities: Building management and safety requirements would require staff to be trained for vertiport operations and to support passenger assistance and safety orientations.

Funding and financing: Investors are likely to be attracted by the vertiport revenue model, and their development could be privately funded by the operating urban air travel companies and by the property developers of the buildings. For essential and public facilities, a shared model with the public sector and the operating company could be developed. 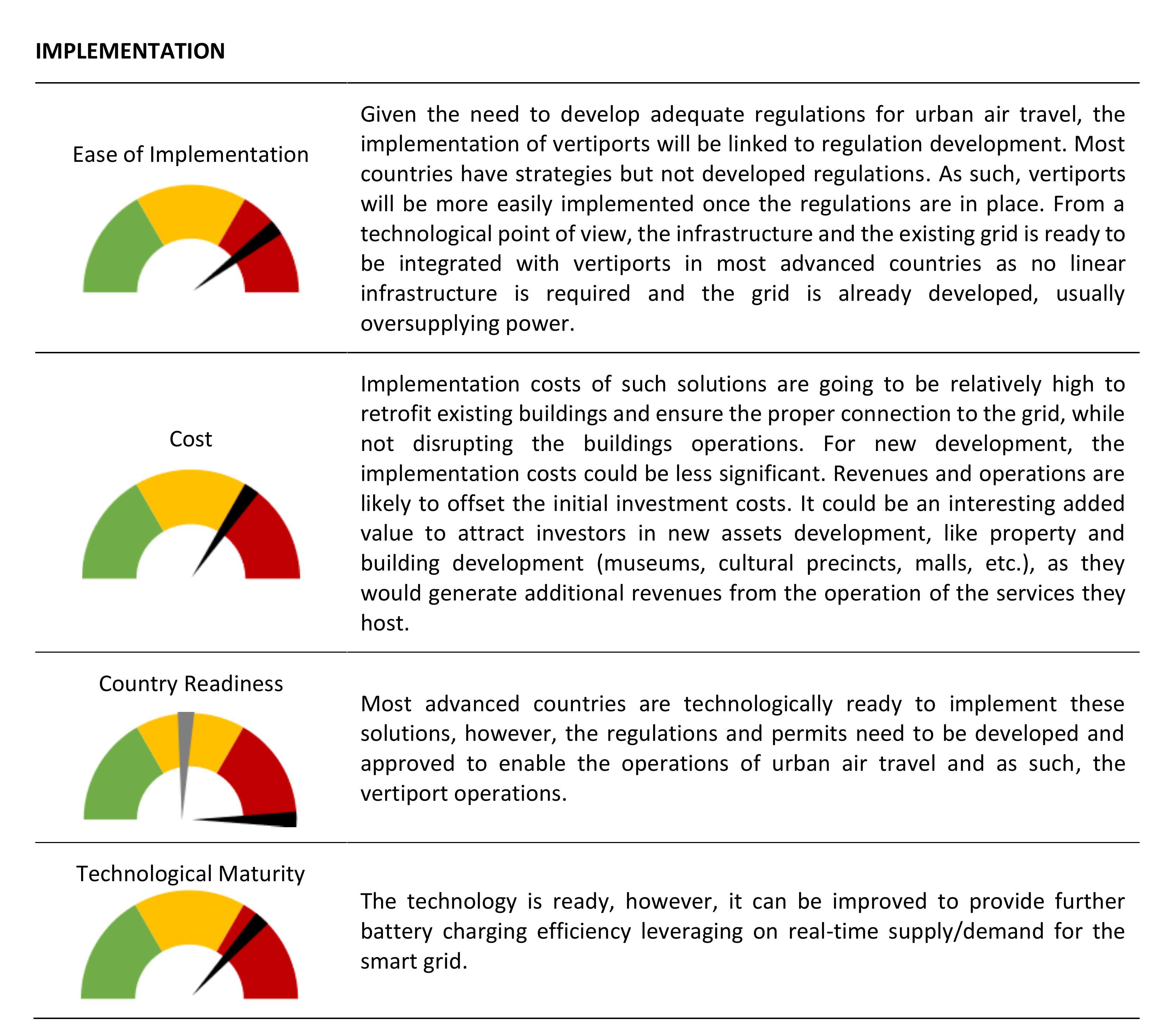 Risk: Air congestion and conflicting movements (helicopters, drones for monitoring) could cause an issue to the implementation of vertiports. It will be difficult to minimize interaction with uncontrolled space (birds, personal drones). The utilisation of the grid for energy supply and of the communications networks must be planned in a way to ensure a sustainable lifecycle footprint.

Mitigation: Government regulation is essential. Vertiport operations will need to be approved and will be highly dependent on the operation model of urban air travel being regulated and proven as safe and fit for purpose.

Risk: The community might not feel safe to use the mode nor to accept the visual and noise impacts brought about by vertiport operations.

Mitigation: Clear communication on the services provided and on the added value of the vertiports to the urban areas should be developed.

Risk: Safety standards would require a significant body of evidence that vertiports support safe methods of transport operations, more specifically regarding their locations and ability to power the aircrafts. Additionally, the exchange of data to utilise the power supplied by the smart grid should be protected.

Mitigation: Regulations should be addressed in the short term. Several organisations would have to be consulted such as aviation regulatory bodies.

Risk: Noise pollution and power consumption are the main environmental risks of vertiports.

Mitigation: Continue developing the technology and make sure it complies with environmental targets and standards.

Implementation: UK ground infrastructure developer Skyports is preparing to open what it describes as “the world’s first vertiport for electric vertical take-off and landing [eVTOL] aircraft” in Singapore. Skyports is seeking to develop a network of eVTOL landing sites across Asia, Europe and the USA with several aircraft manufacturers.

Cost: It is suggested that the Urban Air Mobility (UAM) business model will launch more quickly in places that are more accepting of new technology and have a higher tolerance for risk. Through scalability, the price of UAM transport can be reduced.

Implementation: Architecture firm MVRDV has collaborated with aircraft manufacturer Airbus to develop the Urban Air Mobility (UAM) City Integration report that researches how vertiports could become part of transportation networks in future cities. They looked at how vertiports could integrate aerial and terrestrial transport links in cities around the world including Shenzhen, Jakarta, Sao Paolo, Los Angeles, and San Francisco.

Timeframe: In 2017, Airbus was appointed to lead the Urban Air Mobility Initiative of the wider European Innovation Partnership on Smart Cities and Communities (EIP-SCC) that is supported by the European Commission. The report was published in 2019.

Implementation: Uber unveiled the six prototypes for the “UberAIR Skyports” at its second annual Elevate summit in Los Angeles in May 2018. The designs were developed in response to the Uber Elevate Skyport Challenge, which called for architecture and engineering firms to develop vertiports for UberAIR.

Timeframe: Uber plans to develop the infrastructure for the takeoff and landing hubs with real-estate investment company Sandstone Properties and is expecting to begin tests for the service in Los Angeles in 2020, and subsequently Dallas, Fort Worth and Frisco. They plan to launch a fleet of UAVs to the public by 2023.