Traditionally, specialist engineers would determine the likely present and future demand for services and plan the infrastructure according to best practices and their own experience. The objective of any project like this would be to ensure that the infrastructure is sufficient to meet demand, where greater demand typically requires higher cost infrastructure (e.g. larger pipes, greater telecommunications capacity, etc.). However, a secondary objective is to determine how to achieve sufficient supply to meet the demand requirements at the smallest cost possible, which typically requires using the lowest capacity infrastructure (e.g. the smallest pipes, smallest telecommunications capacity, etc.). Globally, for water utilities alone, it is projected that in 2020 utilities will have a total capital expenditure of 141 billion USD for drinking water and wastewater networks (Global Water Intelligence, 2020).

Engineers have been assisted in recent years with the availability of modelling software which can quickly determine whether a proposed infrastructure solution will meet the projected demands. However, even with these tools, engineers can test dozens of infrastructure solutions at best. Computers can automate the testing of millions of solutions, however these millions of solutions if chosen at random are likely to be terrible in comparison to an engineer’s attempts. Artificial intelligence provides a method of interacting with the modelling software to test millions of solutions which at first are worse than an engineer’s, but over time evolve to be far superior.

The use of AI in this space is not new; there are early examples from the 1990s. This early AI was limited by a lack of large, detailed models of underground infrastructure, and if these models did exist, the computational requirements were unfeasible. With the current digitisation of underground infrastructure and the advent of cloud computing power, the computational requirements have become more feasible and therefore these AI techniques are now becoming more prominent. However, the complexity of these models has significantly increased. For example, a very large (i.e. full-size, realistic) present-day hydraulic model of a wastewater system could require as much as 15 minutes of computational time per simulation. For an AI which requires 30,000 simulations (an approximate lower bound for meaningful results), this large model would still be prohibitively time consuming (approximately 313 days of computational time) and expensive even with cloud computing.

As computational power continues to increase into the future, it will allow engineers and software developers to construct ever more complex and useful solutions. For example, current underground infrastructure plans are generally built for some expected future projection (most likely a conservative projection) of future demands. But it is also understood that the future is very uncertain and the consideration of multiple plausible future projections is important. In the future, it is likely that engineers will make use of greater computational power to create plans that work well over a range of future projections, and therefore are more robust against uncertainties in future demand, etc.

Legislation and regulation: Legislation and regulations are needed to drive innovation in the water sectors to facilitate the adoption of AI technologies used for planning and operations. Governments can develop strategies to drive water utilities and other underground asset owners to invest in more efficient planning activities to better future-proof essential underground infrastructure.

Procurement and contract management: Governments could include the use of such technologies in planning and design phases to improve infrastructure outcomes in both planning and delivery. 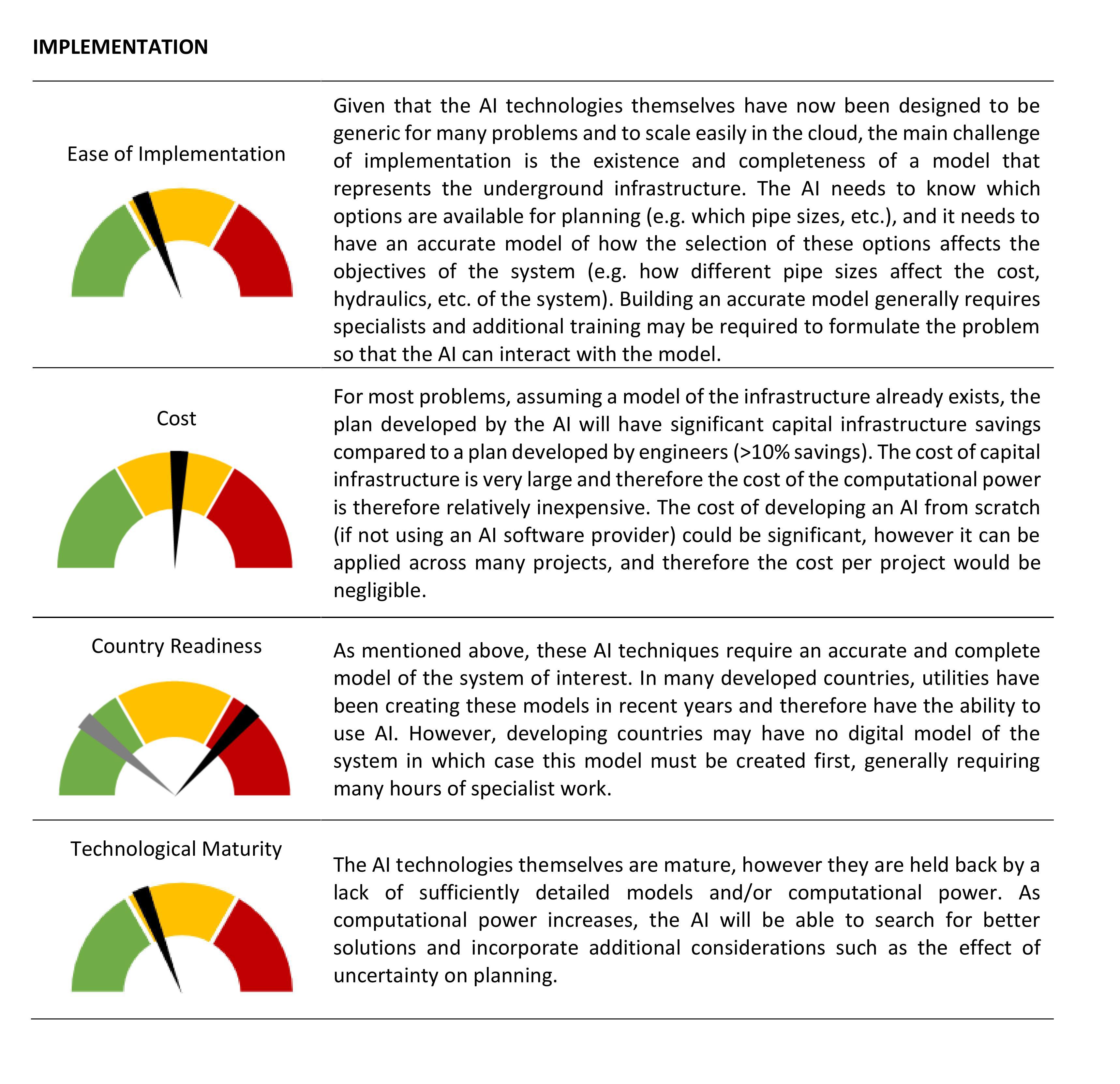 Risk: The plans created by artificial intelligence are dependent on a complete and accurate model of the system being planned. If the model is incorrect (e.g. not validated, system changes over time not reflected in model), then the plans will be optimised for a different system which doesn’t exist in reality and therefore will not be optimal for the real system. This could result in incorrect calculations of cost, capacity, environmental outcomes, etc.

Mitigation: Any use of this AI must be preceded by the development, calibration, and validation of a system model, to ensure that the model is an accurate representation of the system. Additionally, plans should be developed to consider multiple future projections of uncertain variables such as population growth and population density.

Risk: Engineers and regulators who are involved in the planning of underground infrastructure using best practices and trial-and-error will in some cases be suspicious of the abilities of an AI. In particular, they may have concerns about the ability of the AI to produce feasible and pragmatic plans. Similarly, the operators of underground infrastructure may be suspicious that the plans have been created in such a way that they operate inefficiently.

Mitigation: An AI generally performs better than humans, assuming that the AI’s options, objectives, and constraints are carefully formulated. Proper training and upskilling of engineers would show engineers that they still control the feasibility of what the AI produces.

Risk: Underground infrastructure is generally very important for the smooth and stable running of society. Therefore, the models of these systems may reveal vulnerabilities that can be exploited by bad actors. For this reason, there is a risk to putting these models into the cloud.

Mitigation: Modern cybersecurity provides many solutions to this problem that can prevent these models being accessed by those who should not have access to it. This includes that it should be possible for an AI company to provide their AI services to a client without the AI company having access to any of the client’s models or data.

Mitigation: Engineers must be aware of the limitations of the model that they are using (e.g. expected rainfall). They must also be aware of how the system has changed since the infrastructure was built (e.g. how the rainfall has changed over time) and consider the implications of these changes.

Implementation: In order to accommodate an enormous development in Casablanca (Morocco), Optimatics designed a stormwater network with an estimated 300km of pipe.

Timeframe: Development continues to evolve outside of Casablanca, the utility company Lydec is looking to implement a completely new infrastructure that focuses on the stormwater network.

Showcase Projects
InfraTech
Waste to Energy
Organic waste products from sources such as food production and wastewater treatment, can be converted into energy through digestion, pyrolysis, and gasification processes

Showcase Projects
InfraTech
IoT for Remote Rail Operations and Maintenance
Internet of Things (IoT) is a term that describes a community of devices connected to the internet, with the ability to transfer and share data and information with each other