About GIHub
What we do
Our people
Our board of directors
Funders and Strategic Partners
For consultation
Request for proposals
Africa Infrastructure Fellowship Program
G20 Infrastructure Outcomes
CONTACT US
Latest blog articles
Circular economies are the way of the future
How can social entrepreneurs save the future of cities?
Find a Country
Recently Searched
Mauritania
Haiti
Georgia
Ukraine
Lesotho
Malawi
Monaco
Gabon
Most Searched Countries
Brazil
Canada
China
Czech Republic
France
Germany
Japan
Saudi Arabia

The reference tool on Governmental Processes Facilitating Infrastructure Project Preparation closely examines the relationships between countries’ institutional arrangements for project preparation, funding programs, project identification, feasibility studies and project structuring, through the lens of country-level governance and implementation. This initiative closely aligns with the G20 Principles for Project Preparation endorsed by the G20 Leaders in November 2018.

The GI Hub and our consultant, CRISIL Limited, have now completed stakeholder interviews and finalised the reference tool. Guidance is provided around eight central themes for country-lens analysis, including the existing enabling environment, public sector capacity for project preparation, project preparation financing, project identification, feasibility and structuring, and project approvals processes, with close attention being paid to the interfaces between the various entities involved throughout the project preparation process, and how these relationships have led to the development of quality infrastructure projects.

This tool, which is designed to be used by government policy-makers, captures leading practices and lessons learned in national and sub-national project preparation processes currently being implemented around the world, as demonstrated by 15 geographically and economically diverse country case studies. Countries covered in detail include the United Kingdom, Canada, Brazil, Indonesia, India, China, Australia, South Africa, and Mexico, amongst others.

he reference tool can be accessed at https://www.gihub.org/project-preparation/

In November 2018, the GI Hub awarded the consultancy contract for the upcoming Leading Practices reference tool on Output Specifications for Quality Infrastructure to Mott MacDonald. This work has now commenced and will be closely aligned with the G20 discussions on the Quality Infrastructure Investment workstream; a priority area highlighted by Japan.

The objective of this Leading Practices initiative is to provide guidance for government PPP units and line ministries on the development of output specifications for quality infrastructure in PPP projects, including representative examples of appropriate key performance indicators (KPIs), for projects in a variety of sectors. An initial report from the first phase provides further information and is available for discussion.

The final output will be a reference document, with guidance notes and a number of case studies of the specifications used in various sample PPP projects, that will be available on the GI Hub website in mid-2019.

Progressing the Reference Tool on Inclusive Infrastructure and Social Equity

The GI Hub is now finalising a reference tool for governments interested in maximising socially inclusive outcomes and tackling inequality in the planning, design, and implementation of major infrastructure projects. Quality infrastructure that is inclusive can be an important enabler of equitable growth and job creation for disadvantaged groups.

The reference tool presents guidance on the principles and practices of maximising inclusive outcomes through a framework of six structured ‘action areas’, as well as eight detailed case studies on existing infrastructure projects that have tackled issues of inclusion in transport, energy, water and ICT projects in various countries. The reference tool will be published in Q1 2019.

Work has been ongoing on the forthcoming Guidance Note on Infrastructure Banks and Similar Financing Facilities. Our consultant, Cambridge Economic Policy Associates (CEPA), has now submitted their final draft of the Guidance Note, which is designed for use by policy makers considering the establishment of a new infrastructure bank or the reform of an existing institution.

The final version of the Guidance Note sets out recommendations for countries wishing to establish new infrastructure banks or reform existing institutions, based on an analysis of existing approaches of national infrastructure banks and similar facilities, supplemented by stakeholder interviews.

It will be finalised in the first quarter of 2019.

Ongoing Dissemination and Feedback on the PPP Contract Management Tool

Following the launch of the PPP Contract Management tool in July 2018, dissemination of the product has continued, with the tool having been workshopped at a number of events, recently including:

Working with the China Public Private Partnerships Center (CPPPC), the tool is currently being translated into Chinese. The GI Hub is also seeking partnerships with other governments and organisations for translation into other languages.

Engagement of Consultants for the Updated PPP Risk Allocation Tool

The GI Hub has engaged the international law firm of Allen & Overy to update and expand the content of the PPP Risk Allocation Tool to include new projects in the social infrastructure and economic infrastructure sectors.

The tool will also be expanded to address:

Further, the GI Hub is working closely with the World Bank to integrate the tool with the forthcoming new version of the World Bank’s “Guidance on PPP Contractual Provisions”.

Work is well underway on the updated draft of the PPP Risk Allocation Tool, with an early consultative workshop delivered at the Third Istanbul PPP Week conference in Turkey; an event organised by the Istanbul PPP Center of Excellence, where over 20 governments were represented.

The updated draft of the tool is expected to be launched in February 2019. This will be followed by a three-month consultation period, to be undertaken in conjunction with the consultations on the World Bank’s new “Guidance on PPP Contractual Provisions”. 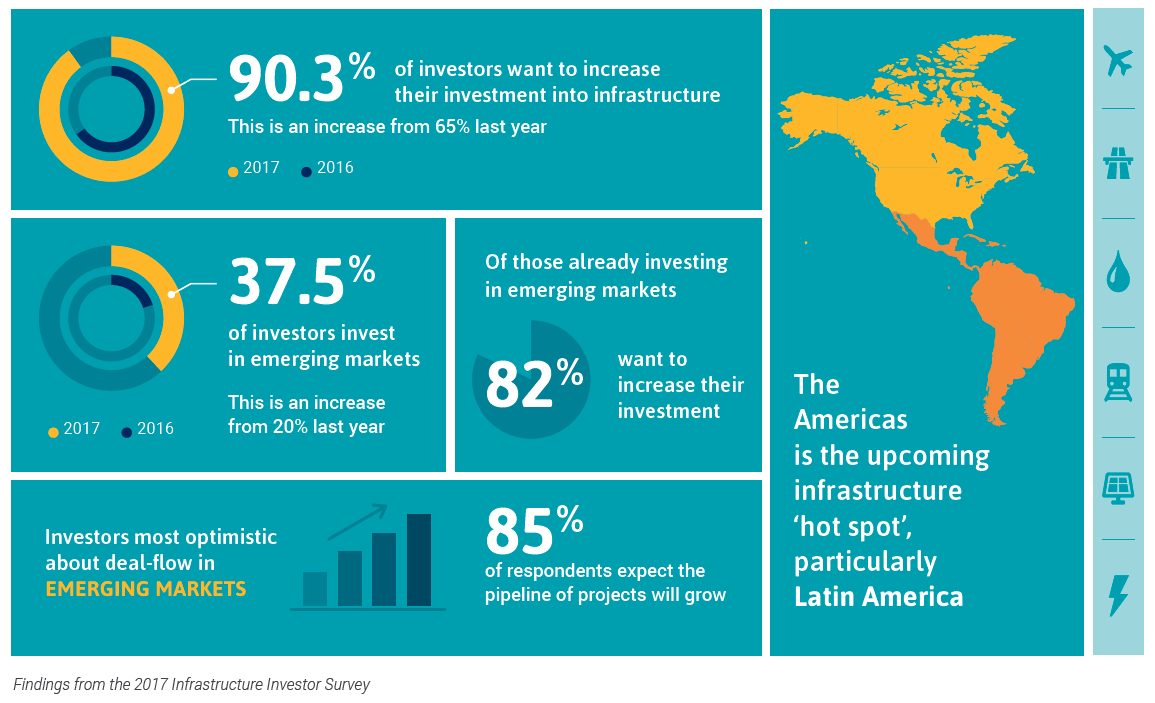 In partnership with EDHEC Infrastructure Institute-Singapore, the GI Hub will be releasing the third iteration of its institutional infrastructure investor survey in March this year.

The survey will reveal not only private sector interest in developed markets, but also in emerging markets. We will also survey investors on the importance of social and environmental impact of investments.

The study is the largest of its kind involving C-level executives, investment directors and senior advisers in the infrastructure sector from around the world. It provides a ‘deep-dive’ analysis which reveals investor preferences and trends in infrastructure markets.

The 2017 survey can be found on the GI Hub’s website: https://www.gihub.org/resources/publications/edhec-annual-global-infrastructure-investor-survey-2017/

Countries and Projects Added to the Global Infrastructure Project Pipeline

The GI Hub continues to focus on country engagement and participating in key global events to promote the Global Infrastructure Project Pipeline.

As of the end of December 2018, there are 4,000 users and 50 countries have published infrastructure projects. In the last quarter of 2018, South Africa, Mauritania and Tunisia have joined the Project Pipeline.

Looking further ahead in 2019, the GI Hub will continue to engage and assist individual countries in developing their own pipelines.