Geothermal Energy from Canals and Mineshafts

Geothermal energy (thermal energy produced by and stored in the earth) produces electricity by using steam to rotate a turbine that activates a generator. This process produces electricity which can then be transported to homes or public places for consumption. Old unused mineshafts and canals are proving to be ideal locations for developing geothermal plants, as minimal initial construction work is required. Geothermal energy can be acquired from mineshafts by converting them into “geothermal boilers”. The boilers are constructed for heating large volumes of water, resulting in the production of steam which is used to rotate the turbine and produce energy. In canals, geothermal energy is obtained through the installation of heating devices such as photovoltaics and high-efficiency energy pumps. The energy produced can also be used to for heating and hot waters for buildings nearby. 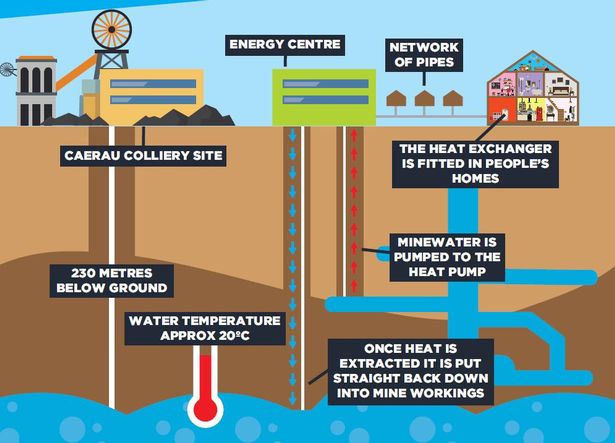 Figure 1: Example of Geothermal Energy Generation at the Caerau Mine-Water Project in Wales

The first testing of geothermal power to produce energy took place in 1904. However, the first large-scale geothermal power plant for electricity production came into operation in the United States in 1960. Since then, geothermal power development and its adaption to different plant sites (i.e. old coal mines and canals) has continued as part of the movement towards renewable energy production and as a result of continued research into sustainability.

Carbon emissions from energy consumption are widely considered to be a significant contributor to climate change. In 2017 the burning of fossil fuels for energy production accounted for 93% of the United States’ total anthropogenic CO? emissions.

Producing geothermal energy results in the production of considerably less carbon emissions than the burning of fossil fuels. However, the extent to which geothermal energy can meet a country’s energy demands will vary quite significantly by country as it is highly dependent on a country’s geothermal resources. For example, the percentage of the population that could be reached by geothermal resources is estimated to be 20% for the UK, 37% for France, 50% for Germany, 75% for Denmark, and 90% for Hungary.

Typically, most geothermal resources are found near the boundaries of tectonic plates as they are closer to the surface and therefore easier and cheaper to tap. Utilising existing structures such as mines and canals can improve the economics of geothermal resources.

To use geothermal energy for heating, the end user needs to be in reasonable proximity to the geothermal resource as the heat will dissipate over long distances.

In order to efficiently develop a network of geothermal systems in a country, sensors can be used to enable the identification of relevant geothermal sources. Sensors can enable the identification of both the location of geothermal sources and the potential level/amount of energy each source can generate. This information can be used both in the planning and operations stages to inform the development and management of the geothermal network to ensure a sustainable and efficient energy supply. Sensors can aid in the management of the network by monitoring the level of steam developed by each source which can then enable operators to stabilise/balance steam levels throughout the asset’s lifetime.

Legislation and regulation: The government should outline the necessary safety standards, applicable to both the construction, and operations/maintenance phases of the geothermal system. Specifically, safety precautions for workers and neighbouring communities with regards to trace toxic chemical release, strategies for maintaining earth stability and guidelines for social and environmental impact studies (that must be carried out prior to construction commencing) must be developed. Governments should ensure that precautions such as weather stations (for assessing any environmental impact) and any additional infrastructure for environmental and safety risks, are built alongside the project.

Transition of workforce capabilities: Employees working in geothermal plants will need to acquire certain qualifications to understand the operations, and safety and maintenance aspects of the geothermal plant. Safety inductions should be undertaken to guarantee their competency in dealing with hazardous situations. 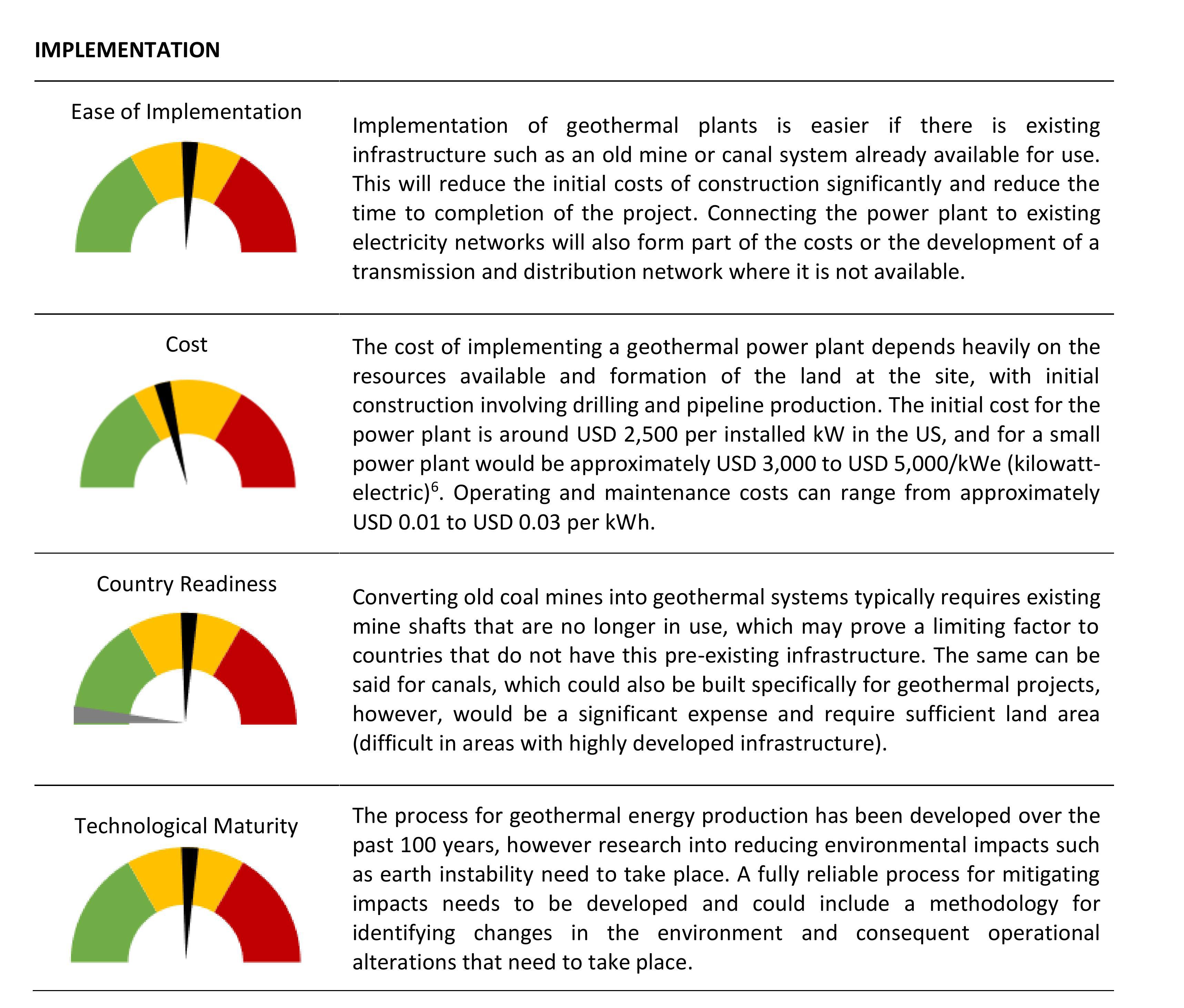 Risk: There is a resource risk associated with geothermal projects, as the characteristics of geothermal plants vary from site to site i.e. a geothermal system in an old mine will vary greatly to that of a canal in terms of process and operations, maintenance, regulation and policy. Although the lifetime of a geothermal plant is significant (at least 20 to 30 years), the amount of steam/brine can decline over time due to fluid chemistry change.

Mitigation: Systems should be designed differently for each unique site and maintenance and monitoring plans catered to these specific requirements. For controlling levels of steam and brine, investments in sensors should be made to monitor and stabilise levels throughout the entire lifetime of the geothermal system.

Risk: Communities in the surrounding area may cause resistance to the commencement of geothermal projects, due to fear of the potential environmental impacts and unawareness of how the system works and its benefits.

Mitigation: Prior to the commencement of the project and throughout its lifetime, investors such as government sectors/authorities should conduct community education and consultation programs, in order to develop project awareness and receive any community-based complaints or proposals with regards to corporate’s social responsibility.

Mitigation: A ‘traffic light system’ is used to manage earthquakes, with operational adjustments taking place if the potential for or size of an earthquake increases. At present geothermal projects are guided by the idea that if a certain volume of fluid is not put into a plant, earthquakes won’t occur beyond a certain size, however this concept needs to be discussed and developed further to improve hazard mitigation.

Risk: Geothermal power plants can contain trace amounts of heavy metals such as mercury and arsenic, resulting in Sulphur Dioxide and silica emissions, which can be detrimental to health. Additionally, geothermal power plants produce solid waste, that must be disposed of in appropriate locations.

Mitigation: Mines can be converted into geothermal energy systems at locations that are isolated from populations, and people working at geothermal plants should take necessary precautions such as wearing high quality filtering masks. For handling sludge outputs, geothermal companies can sell extracted solids such as zinc and silica etc, reducing waste and enabling a more sustainable process.

Implementation: Utilising the existing canal network in Milan to produce geothermal energy through the installation of photovoltaic cells and high-efficiency electrical heat pumps.

Implementation: Plans for the development of abandoned coal mines (in northern England) into geothermal power plants are being made, to supply heat to buildings.

Timeframe: The project has been discussed initially in 2020, and it is estimated to take approximately 7 years to develop a geothermal power plant from resource identification to commercial operation.

Implementation: Waterways in the West Midlands are soon to be used for heating hospitals and tower blocks.

Cost: The British government has promised to spend more than GBP 20 million on nine schemes across the country to use renewable heat energy from canals, old mines and tube lines.

Timeframe: The government plans to have the renewable energy system fully implemented by 2030.