Policy approach(es) used to catalyse investment: A change in regulation

Technology approach(es) used to catalyse investment: Implementation of a data platform or digital twin for greater transparency over performance

A Virtual Power Plant (VPP) is a cloud-based system that integrates several types of Distributed Energy Resources (DER) such as wind farms, solar parks, and combined heat and power units, as well as flexible power consumers and storage systems. VPPs are decentralized, medium-scale power generating networks that are used to enhance power generation, as well as enable the trading of power on the electricity market.

Due to the variety and number of energy sources that are amalgamated into the network, the VPP can produce a reliable power supply that can replace or complete a conventional power plant. VPPs can provide higher efficiency and flexibility which enables them to react better in response to fluctuating demand and deliver peak load electricity at short notice. 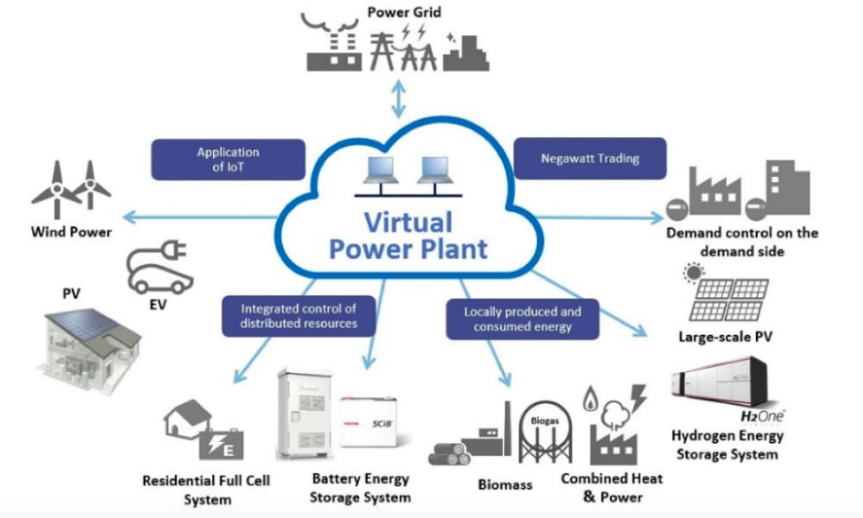 As illustrated above (image source Toshiba), a central system is used to dispatch the virtual power according to the given demand. VPPs can avoid the load and ‘accumulation’ of power on the grid by intelligently distributing the power generated by the individual DER units during periods of peak load. Additionally, the combined power generation and power consumption of the connected units is traded on the energy exchange, which can be optimised using Agent-Based models (ABM).

Recently there has been a growth in the small-scale distribution of energy resources. This is particularly apparent in the installation of solar panels in the residential housing sector. The demand for electricity is also rising in line with population increases around the world as well as with other factors, such as technological advances which require more electricity. The increasing demand and increasing reliance on renewable intermittent sources of energy are straining centralized energy grids, which are experiencing an increased number of power outages and disruptions. VPPs are one mechanism that is being developed to respond to this issue.

VPPs provide ancillary services to grid operators to help maintain the balance of electrical supply and demand, thereby ensuring grid stability. Where fossil-fuel power plants rely on signals from grid operators to increase or decrease energy supply in response to demand, grids that rely on high percentages of solar or wind energy will need to use other mechanisms to control power generation. A VPP acts as an intermediary mechanism between individual DERs and the wider electricity market. These transactions are performed using ABM technologies that maintain a digital record of secured transactions across the network. Furthermore, ABM technologies can consider competing priorities when assessing where to direct the power supply. This has been made possible due to the increased availability of data in VPP networks. ABM can simulate complex patterns based on variances in demand and user behaviour responses. Together they enable a quick and efficient interrogation of real-time demand of the power supply and match the delivery of the power to targeted areas through various routes that always follow the same rules and priority orders. With the incorporation of Artificial Intelligence (AI) this system can learn different paths and prioritisations via machine learning.

There are similarities between VPP and Microgrids (see also the Decentralized Microgrids and Peer-to-Peer Energy Transactions Use Case). Where they differ is that a microgrid has a defined network boundary that can disconnect from the larger grid to create a power island. VPPs can extend over a much wider geographical region and can expand or shrink in response to real time market conditions.

Demand-based incentives can be used to reduce energy consumption. In scenarios where the demand is lower than the power supply as a result of energy conservation (the reduction in energy consumption by using energy more efficiently or reducing the amount used), VPPs can manage this excess and sell the electricity to other companies on an exchange “negawatt market”, rather than wasting the energy. Each negawatt-hour refers to a unit of energy saved as a direct result of those energy conservation measures. This marketplace enables electricity trading, smart grids, and the sector coupling of electricity, heat and transport to be incorporated into the ABM model. Pilot schemes such as these are underway around the world, including in the US and Europe. Japan, where these test projects were first initiated in 2017, intends to have a full-scale market for negawatts operational by 2021.

Artificial Intelligence (AI) is becoming increasingly important in the energy industry and will play an integral role in the future development of the energy system. AI can typically be applied in electricity trading, smart grids, or the coupling of electricity, heat and transport sectors.

An example of this is Vehicle to Grid (V2G) technology (see Electric Vehicle Charging Infrastructure use case). In this system, electric vehicles connected to the grid can act collectively as a VPP. The rate at which each vehicle is charged can be controlled to enable the grid to have a net injection of energy or consumption of energy in response to wider demand. For example, where there is high demand, the energy supply to the wider grid will be prioritized, resulting in less power being directed to charge electric vehicles. This would mean it would take longer to charge the vehicles, but other demands on the grid could be met. AI can assist in adjusting this charging demand by monitoring and coordinating availability. In addition, the AI can stabilize the power grid by detecting anomalies in generation, consumption, or transmission in near real time, and then develop suitable solutions in response.

The exchange of data between the individual DER sources and the centralised VPP generates real-time data on the capacity utilization of the networked units and can be used to generate precise forecasts for electricity trading and scheduling of the individual power plants operations. As there are strict requirements regarding the availability and reliability of the market, ABM-based VPPs can deliver the same service but from various power plants.

Companies will need to consider challenges such as imbalance loads and difficulties integrating diverse resources, which have to date been key disruptors that energy sectors have looked to tackle through the use of VPPs. Using ABM, VPPs offer cost-effective solutions to integrate different energy sources and transform business models to allow companies to benefit from reliable, fast, safe grid management and deliver clear precise demand responses for grid operators and power utilities, utilizing data.

The overall aim of the VPP is to optimise the network distribution of various energy resources as well as develop a flexible power demand and storage systems to enable the monitoring, forecasting, optimization and dispatch of energy. Through their aggregation in to a VPP, the individual DERs can be forecasted, optimized, and traded like one single power plant. That way, fluctuations in the generation of renewables can be balanced by scaling up and down power generation and power consumption of controllable units. Viably integrating renewable energy sources into existing markets is another primary objective of a VPP. ABM can also help to automatically monitor and analyse trading trends on the electricity market. This makes it possible to detect and prevent deviations from the norm, such as the abuse of market power, and help to orient the regulations of the energy market.

Legislation and regulation: The success of VPPs in the future will be largely dependent on local government regulation and energy policy. Government will need to allow this type of market design to be implemented and determine how taxes and fees will be distributed. They will need to understand how this new market will interact and affect the existing energy market and develop regulations that ensure its efficiency. It is also important to implement regulations to protect user data and make the use of AI transparent and comprehensible.

Transition of workforce capabilities: VPP operations will rely on the use of ABM models, which will require the corresponding training of operator staff.

Funding and financing: Government grants and clean energy incentives can be utilized to minimize the cost of installing DER units for individuals and commercial and residential projects. Tax credits for renewable energy may also be applicable to VPP projects.

Procurement and contract management: Energy-as-a-service contracts are becoming more commonplace, in which there is little or no upfront capital cost to the customer. They instead pay a fee for their energy on an ongoing basis in much the same way as if they purchased the energy from a traditional utility provider.

Risk: The economic optimization of the VPP components requires energy to be provided from green, available and economically viable power plants. In addition to that, the security of the power supply should not be harmed.

Mitigation: During the implementation of a VPP operational application, it will be important to reflect those implementation requirements in the models: data collection of load schemes and market prices should be developed (base, peak, off-peak, etc.), in addition to specific standards for the design of adapted VPP configurations, including an optimization concept and an information communication concept.

Risk: If the sources of power are not viable in time, it will be difficult to justify the transition of jobs and workforce capabilities that will be necessary to operate the VPP solution.

Mitigation: By delivering secured power, VPP applications will become competitive against conventional power plants, so that competitive market measures could be used to ensure social stability.

Risk: The digital platform will hold significant sensitive data concerning user’s personal information and transaction history. There is a risk that the system will be vulnerable to cyberattack, and that user data would be compromised.

Mitigation: AI could be used to detect malicious activity by analysing anomalies in the data, which could then trigger an alert and/or the AI could “learn and prevent” the attack itself by telling the system to ignore incoming rogue data or commands and block the attack.

Risk: The processing of large amounts of data consumes a lot of electricity. When using AI for energy system transformation, it is crucial to analyse how to design the data centres themselves to be energy-efficient and as climate-neutral as possible.

Mitigation: Possible solutions to this dilemma include the physical proximity of data centres and renewable energy generation plants, the postponement of power-intensive computing operations to times when a lot of power is available, more energy-efficient IT hardware, or programming that requires as little computing power as possible.

Implementation: A trial project in Tasmania’s Bruny Island, which links 33 homes with battery storage into a single network. The system uses algorithms to orchestrate their operation considering variations in price signals, both in location and time, and manages the batteries’ outputs accordingly.

Timeframe: The trial took place in 2016.

Implementation: The VPP will support the regional power grid by absorbing excess wind energy stored across a network of batteries, which are networked using distributed ledger technology.

Timeframe: The partnership between Shell’s subsidiary Sonnen Group and the Energy Web Foundation (EWF) was announced in March 2020.

Implementation: Tesla is working with the South Australian Government and energy retailer Energy Locals to develop and test a virtual power plant in South Australia. The VPP is being introduced as a trial with three phases and will include up to 50,000 homes.

Cost: The VPP is expected to cost AUD 800 million, much of which will be funded by private investors. The trial phases were supported by an AUD 2 million grant and an AUD 20 million loan from the South Australian government's Renewable Technology Fund.

Timeframe: Phase I which trialled the technology at 100 homes is complete. Phase II which extended the trial to 1000 homes was conducted in 2019. Phase III will involve rolling the technology out to 49,000 additional homes.