Although the topic of infrastructure may not attract bold headlines, the reality in many parts of the world is that the inadequate provision of critical infrastructure services is emerging as one of the most significant risks to our well-being and the success of our communities.

The problem is already visible in almost every country. It can be seen in strained and crumbling highways, bridges, and rail networks; ageing airports barely able to cater for a population that is more mobile than ever before; and failing electricity grids that paralyse entire cities.

And then there are the more fundamental and basic needs in countries where infrastructure networks are elementary. According to the UN, more than a billion people live without electricity, with more than half of that figure living in sub-Saharan Africa, and almost 880 million people do not have access to a basic water service, while at least 2 billion people are using contaminated drinking water.[1]

At the same time, our global population continues to surge, with a forecast of a 25% increase to 2040 – an extra 2 billion people. More and more of the population is living in our cities, both increasing the potential for economic growth, but also further taxing our existing urban infrastructure.

The challenge is clear for governments: there is a need to deliver quality, purposeful infrastructure that gives communities what they need - not only to survive, but to thrive.

Add the UN Sustainable Development Goals (SDGs) of universal provision of clean water, sanitation, and electricity, and the total cost rises to US$97 trillion.

The analysis undertaken by the GI Hub with Oxford Economics reveals a shortfall in needed spending of more than US$18 trillion, based on current spending levels.

Closing this gap and meeting the SDGs for drinking water, sanitation, and electricity will require a growth in spending, as a proportion of global GDP, from the current level of 3% to 3.7%.

More than half of all infrastructure investment needs to 2040 are in Asia, and China alone is forecast to require US$28 trillion in investment – a massive 30% of the total global spending. 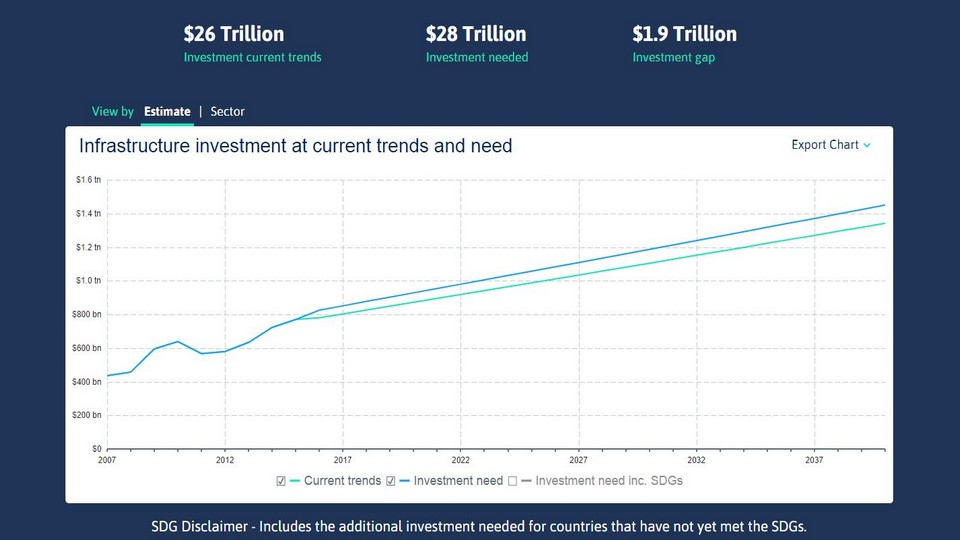 However, China’s investment gap is relatively small, as a result of the country’s high current levels of spending on infrastructure.

In contrast, the United States is forecast to have the biggest gap in infrastructure spending of any country over the period, based on current spending trends.

In Africa, most countries have large infrastructure needs and face significant gaps.

Not surprisingly, in Europe, most countries perform well, although Russia has the fourth largest infrastructure gap in the world, with a shortfall of 41% of its total investment needs. 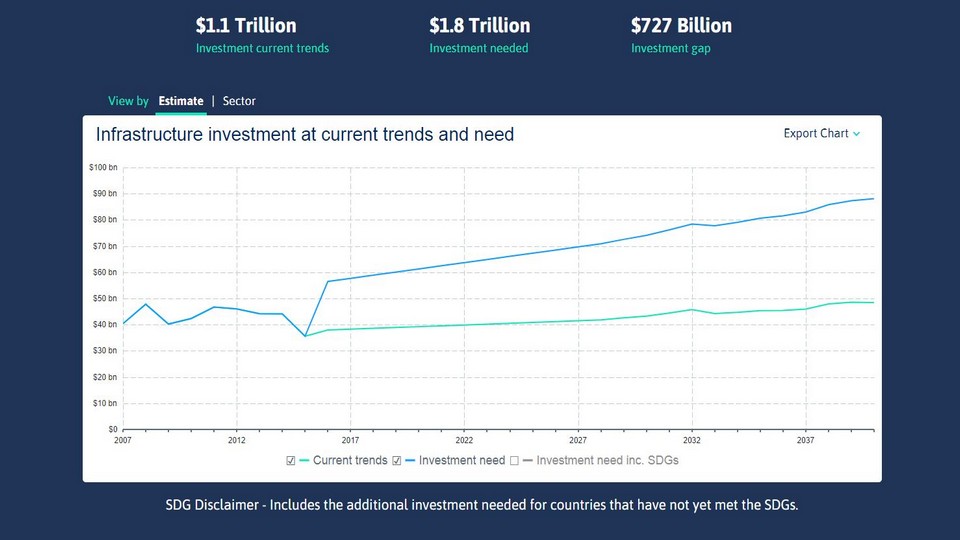 The point of this new study is to highlight to governments and the private sector where funds need to be spent to ensure our communities have access to the infrastructure services that will be required in the future.

It should also prompt global action on meeting the SDGs and providing universal access to clean water, sanitation, and electricity, targets which will fail to be met on current spending trends.

Significantly, the Outlook report also tells us which countries have a spending gap and risk failing to deliver adequate infrastructure over the next 20 years.

We know that developing infrastructure is challenging for governments with their constrained budgets, and that private sector financing of major infrastructure projects requires governments to undertake careful planning and solid project preparation.

But investments in quality infrastructure projects can yield a myriad of benefits – including significant long-term improvements in productivity, increased competition, and greater wealth creation.

Robust and well-planned projects can expand the long-run potential of developed and emerging economies, irrespective of how they are financed. IMF simulations suggest that investing an extra 1% of GDP into public capital can deliver a boost to GDP of up to 2.5%.[2] However, to realise these productivity benefits, infrastructure projects need to be carefully chosen, support an economic plan, and be procured efficiently.

There are trillions of dollars in private investment ready to be mobilised to fund new infrastructure. The key to unlocking it is providing a pipeline of quality projects to draw investor interest and commitment.

The 2016 Global Infrastructure Hub/EDHEC investor survey, Barriers to Private Sector Investment in Emerging Markets, found that 65% of existing infrastructure investors wanted to increase their allocation to infrastructure in the next 3-5 years, but 92% of them felt that there were insufficient investment opportunities.

Outlook and its findings should be a wake-up call for governments across the globe to plan for long term infrastructure needs, and to develop pipelines of quality, bankable projects ready to attract private sector investment.