Organic waste products from sources such as food production and wastewater treatment, can be converted into energy through digestion, pyrolysis, and gasification processes. These processes turn the organic material into a gas (biogas, syngas, hydrogen) and a biosolid stream (biochar, biosolids). The gas stream can be used as an alternative to fossil fuels in a combined heat and power (CHP) plant as a renewable source of energy. While the biosolids stream can also be used as an alternative fuel source, it is typically more useful as a nutrient source and soil improver in land applications for the agriculture industry.

The digestion of sludge from wastewater has had a long history and originally the aim was to reduce the mass of the biosolids produced. The production of biogas from the process has also been long known, but this was commonly flared off and it was not until energy prices rose that interest was renewed in the energy potential from the biogas. In more recent years advances have been made in refining digestion operation, as well as in pre-treatment technologies, such as thermal hydrolysis, both of which have improved the biogas production and throughput. There has also been the addition of alternative organic feed stocks such as food waste which has dramatically increased the number of systems in operation.

Advanced thermal treatment processes, such as pyrolysis and gasification, are also not new concepts, but technological improvements in their operation as well as improved management of flue gases have made them more viable. These processes can use a wide variety of wastes as a feedstock, from municipal solid wastes, to food wastes and even biosolids from digestion processes, diverting this waste from landfill and generating valuable resources in the form of gas and biochar.

The gas produced from these processes has value as an alternative fuel for energy generation, but it also can be injected into the gas grid. There is a view that piped natural gas may cease to exist as a product at some stage in the future (due to the sustainability objectives and environmental impacts). As such, the industry is looking to incorporate renewable forms of gas (either via biogas or hydrogen) into their product and service offerings. The gas produced from these processes will require waste from food production and wastewater treatment and are attractive potential sources of gas.

The world is undergoing unprecedented changes in terms of population and economic growth, and it is predicted that the environmental tipping point will occur over the next 30 years. There are a finite number of resources in the world and yet single-use consumption (and a linear economy) is still a mainstream behaviour; only a small proportion of the products we consume are reused and recycled. With increasing population growth, the increasing mass of biosolids from wastewater treatment facilities is becoming a prominent concern globally, especially in urban areas where it might have high levels of heavy metals, chemicals (e.g. PFAS and PFOS) as well as pharmaceuticals and micro-plastics, making its disposal particularly challenging. Waste to energy technologies are a key part of the shift from linear to circular economies and to help reduce pollution.

The achievement of a circular economy is a long-term ambition. It requires significant innovation in how projects are developed and managed, and involves complex, and potentially non-existent, supply chains. Behavioural change will be needed. Beyond energy, there a multiple valuable resources that can be generated from organic waste, such as nutrients, bioplastics, and proteins. There is potential for technologies that can automatically optimise and maximise the re-use of resources in waste.

Legislation and regulation: Legislation should set concepts and principles related to waste management, such as life-cycle thinking, as well as defining wastes and by-products and increasing resource recovery in production, circulation, and consumption. The cost of waste disposal is the main driver for waste producers, so policy and regulation should seek use cost incentives so that circular economy options are lower than the cost of standard disposal. Government can also put an obligation on electricity suppliers to source a percentage of energy from renewable sources and thereby encourage investment in renewable generation.

Transition of workforce capabilities: There will be a need to change mainstream behaviour from a linear consumption mindset to a circular one. Education and examples of beneficial re-use can be used with the goal of embedding innovation and sustainable development within public and industrial culture. Currently there is widescale workforce capability and knowledge in digestion, but there will be a requirement to increase the skills in the local workforce in regards to design, build, operate and maintain more advanced thermal treatment process.

Funding and financing: Government can incentivise the adoption of these technologies through renewable credits and guaranteed feed in prices for waste to energy operators to either the electricity or gas grids. Waste collection tariffs such as gate entry fees can provide a revenue stream to fund operations.

Effective institutions: Large waste producers will need to collaborate with small scale producers where small-scale waste to energy plants may not be feasible yet. 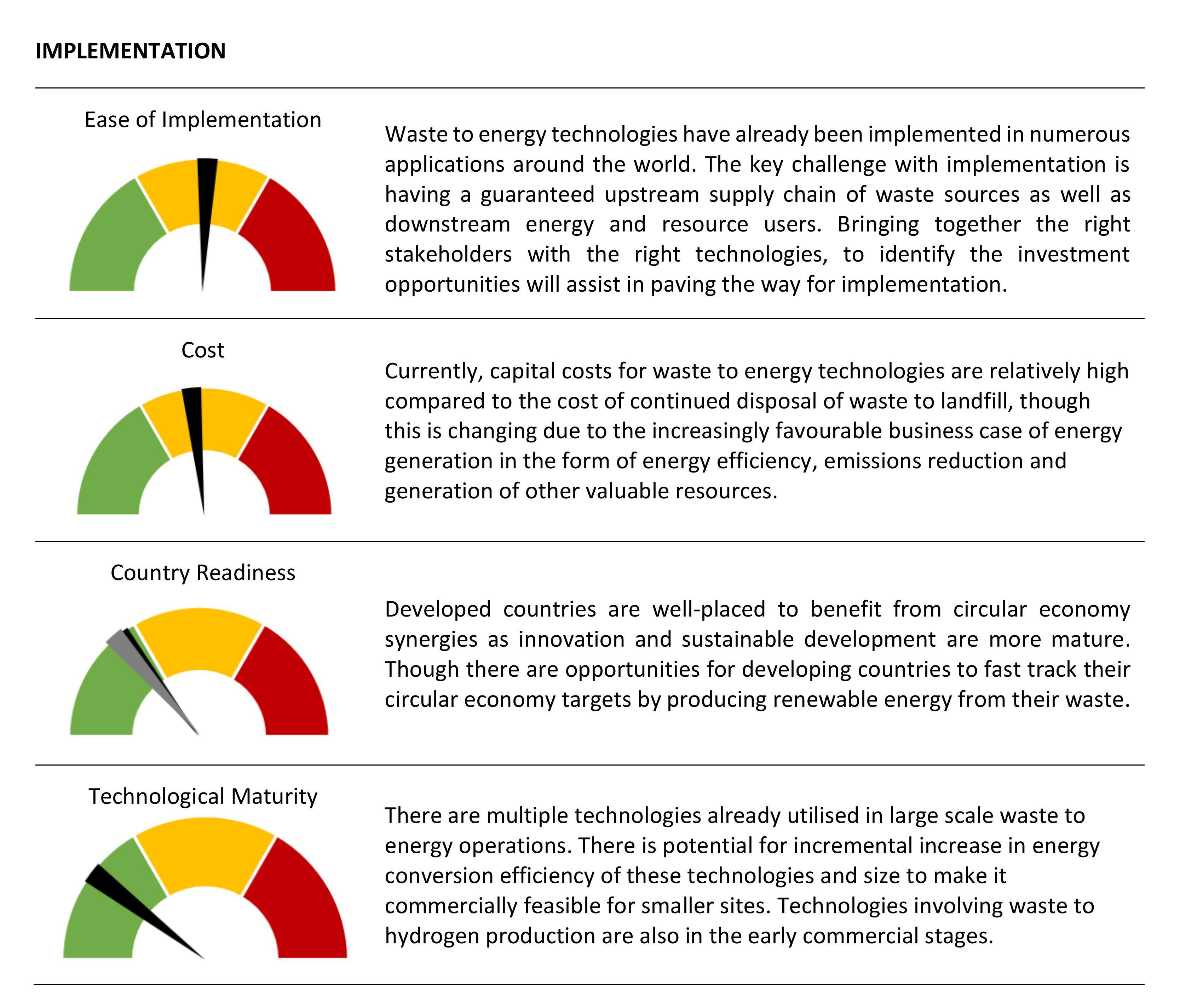 Risk: Exposure to the competitive and/or regulatory landscape. For example, it is challenging (and in many cases, impossible) to secure long-term contracts for the supply of high-calorific commercial and industrial waste for the purposes of digestion or gasification. This is a key market risk for waste-to-energy projects as waste producers and/or waste management companies will be driven to dispose of their waste at the site that offers the lowest possible disposal cost. This can lead to fluctuations in revenue due to the competition. This is a critical risk that has led certain projects to accept the waste for free to guarantee its availability.

Risk: These technologies are thermally decomposing waste products into gas which is then combusted to generate electrical energy. The quality of the gas produced and the method of combustion determines the amount and type of greenhouse gases emitted into the atmosphere.

Mitigation: Improvements are being made in combustion exhaust scrubbing to reduce pollution, but there have also been developments in carbon capture technologies, though most are not economical on a small scale. Alternatively, greater implementation of pyrolysis processes would reduce greenhouse gases because they operate in the absence of oxygen, producing a gas with a higher quality and energy value compared to gasification or digestion.

Risk: The implementation of a circular economy project attracts a high price tag; not just in the capital and operational expenditure but in skilled staff to design, build, operate, market and sell the recovered products. As mentioned previously, technical and market risk can quickly erode profits if not managed appropriately.

Mitigation: One way to mitigate financial risk is to establish a joint venture with a credible and experienced partner (or partners). In a joint venture, all project stakeholders invest capital into a new entity which is then mandated to design, build, own and operate the project.

Risk: Individual proprietary technologies (and combinations of them) can present stark contrast even for the same energy production. This is because each technology will have different CAPEX and OPEX figures (e.g. some may use chemicals, some may not) but more importantly, each technology will produce different yields for the same waste product. Quoted figures from technology companies may overstate their yields which will have an impact on the business case if savings or revenue are being relied upon for a positive net present value. For this reason, a reasonable level of confidence in the business case inputs is critical during the feasibility stage.

Mitigation: This can be managed by direct engagement with technology companies and client references to gather quoted vs. actual data; where the level of confidence in the data is relatively low (say, in the case where a technology company has no commercial-scale installations) then this presents a technical risk (as identified above) and should be weighted accordingly during the decision making process.

Implementation: A waste-to-energy cogeneration power plant is being constructed in the Lithuanian capital of Vilnius, led by Vilnius kogeneracin? j?gain?, a subsidiary of state-owned energy company Lietuvos Energija.  It will convert waste into heat and electricity. Once operational, the power plant will employ an average of 35 people to cogenerate heat and electricity from waste, with an efficiency coefficient of approximately 100%.

Cost: Total investment for the is EUR €141 million, with the EU’s Cohesion Fund contributing €48 million through the “EU Structural Funds Investments” Operational Programme.

Timeframe: The power plant is expected to be completed by 2020.

Timeframe: Plans to have the plant operating by the end of 2020.

Implementation: Project in Tournai, Belgium to design, construct and validate a 1.8 MW gasifier technology with 6 different sources of bio-wastes with the end objective to upscale into a 12.6 GWh energy produced per gasifier per year, with 2,495 tons of CO2 emissions avoided.

Cost: Total investment for the project is EUR €5.5 million, with the EU contributing €2.7 million through the LIFE Programme.

Timeframe: The project started in 2014 and a fully operational prototype by 2020.

Showcase Projects
InfraTech
Electric Charging Infrastructure for Road Vehicles
Many governments are supporting measures to encourage the uptake of Electric Vehicles (EVs) as they can contribute to a wide range of transport policy goals, including improvements in air quality and noise pollution