The GBP 4.2bn Thames Tideway Tunnel (“TTT”) project, a 25km tunnel to run beneath the River Thames in the centre of London, is the largest sewer improvement project to be conducted in the UK for over a century.

TTT will be connected to 34 existing combined sewer overflows running along the River Thames which are owned and operated by existing water utility Thames Water.

Once completed, Thames Water will operate the tunnel as an integral part of the London sewerage network, while Thames Tideway will be responsible for its day-to-day maintenance. Thames Water’s wastewater customers will pay for the TTT through their bills.

Due to the significant scale and complexity of the TTT, the potential for impact on Thames Water’s core business services and the fact that Thames Water already had an extensive capital works program of maintaining and updating its existing infrastructure, it was decided to procure the tunnel via a separate provider, which would become a new utility regulated by Ofwat (the Water Services Regulation Authority for England and Wales).

A competitive procurement process was conducted to select an independent infrastructure provider to finance, build and maintain the tunnel based on the lowest bid Weighted Average Cost of Capital (“WACC”), other commercial factors and deliverability. Bazalgette Tunnel Limited (“BTL”), subsequently known as “Tideway”, was the successful bidder and was granted by Ofwat a project licence to design, construct, finance, test, commission, own and maintain the TTT.

Thames Tideway Tunnel is widely considered to be a landmark project and it has received broad recognition for some of its leading features. Some of the project highlights are considered to be:

A committee to consider solutions to limit the sewage discharge into the River Thames from the Thames Water sewerage network was set up in 2001 and reported on potential solutions in 2005. While awaiting the report, in 2004 the European Commission initiated ‘infraction’ proceedings against the UK for breaching the EU Urban Waste Water Treatment Directive. Further assessment of options continued in 2006 and the UK Government confirmed support for the proposed solution in March 2007. Community consultation on the solution, tunnelling routes and shortlisted sites continued until 2012.

Thames Tideway Tunnel Package - What did bidders bid on?

As the majority of the Tideway structure was pre-set by Thames Water before the competitive equity tender, equity bidders were not permitted much scope to propose changes or adjustments to the mechanics of the deal. As part of the equity bidding process, the successful bidder received the following:

The total debt to be raised by the business in the construction period is anticipated to be in the order of GBP 2.6bn. A GBP 1.0bn, 10 year, revolving credit facility was raised on financial close. The debt was provided by Credit Agricole CIB, Lloyds Banking Group, Mitsubishi UFJ Financial Group (MUFG & BTMU), Royal Bank of Canada (RBC), Santander and Sumitomo Mitsui Banking Corporation (SMBC). A proportion of the required debt has been sourced from the European Investment Bank (EIB), however at financial close the amount or terms of this debt were unknown.

Subsequently, additional incentives have been added for the alliance participants to reward completion in a shorter timeframe than originally contracted.

On 24 August 2015, Tideway received its project licence from Ofwat, with the main works preliminary construction beginning in early 2016. The project licence was adapted from the usual water industry utility licences, so it is familiar to investors in the UK water industry, but contains project specific adaptations from the standard existing regulatory regime.

The tunnel is being funded via an additional charge to Thames Water wastewater customers as part of the regular Thames Water billing process. Tideway will be paid by Thames Water on a pay when paid basis (this means when Thames Water collects the payment from customers, the proceeds will be passed on to Tideway). Tideway’s revenue is based on the WACC applied to its RCV, with the revenue increasing each year as the RCV increases. The cost per Thames Water sewage user is expected to be around GBP 20-25 annually by the mid-2020s.

For the first time, a competitive tender process was run to establish the cost of capital for the new utility, rather than the WACC being determined by Ofwat (as is the case for other UK water/sewerage utilities through the periodic price review process). As part of the competitive process, the bidders bid a fixed WACC up until 31 March 2030 or the next 31 March date following the post construction review, whichever is earlier (“the reset period”). After the earlier of either of these dates, the WACC will be set by Ofwat in line with the typical UK water/sewerage industry periodic price review practice. Some regulatory guidance was obtained during the process to assist in understanding the factors that will likely be taken into account by Ofwat in making future WACC determinations.

Up until the reset period, the RCV is to be adjusted annually to reflect Tideway’s actual historical expenditure for the project and the latest estimates of project. At the reset period, the RCV may be increased / reduced based on the shared construction cost underspend / overspend below / above the agreed level of construction costs (as applicable).

As not all required debt was raised at the project inception, Tideway’s licence allows for a finance cost adjustment which, in certain circumstances, will provide an increase or decrease in Tideway’s revenue if the market cost of debt raised later increases or decreases (as applicable).

A government support package was procured to cover areas the private sector could not reasonably commercially cover (during construction) to mitigate exceptional risks faced by equity and debt:

Main project risks are being assumed by: 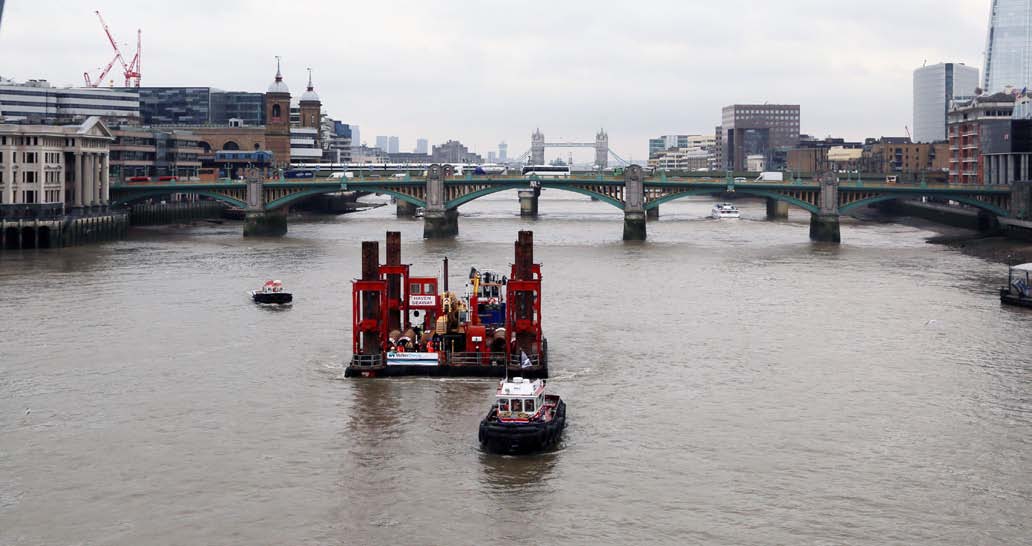 London’s Victorian sewers lack the capacity to meet the demands of the vastly increased population in London. The existing sewerage system was designed, when the population was around 2.5 million in London, for a maximum population of 4 million residents. London now has over 8.5 million residents and combined sewer overflows discharge directly into the River Thames more than once a week on average. As little as 2mm of rainfall can trigger a discharge. Designed to connect to an existing sewerage system which is more than 150 years old, the tunnel will connect to 34 of the most polluting combined sewer overflows. The new Thames Tideway Tunnel system is expected to reduce the number of discharges to a maximum of four annually. Along with other improvements collectively known as London Tideway Improvements, the Thames Tideway Tunnel will assist in reducing an annual estimated discharge of 70 million cubic metres in a typical year by 2020, to 2.6 million cubic metres.

The tunnel will have a 7.2m diameter and will run 25kms (15 miles) from 30m below Acton in the west of London to 70m below Abbey Mills in the east, generally running below the river Thames in London. From Abbey Mills the sewage will enter the existing sewerage Lee Tunnel for transportation to Beckton Sewage Treatment Works where the recycled clean water is then released into the River Thames.