Internet of Things (IoT) is a term that describes a community of devices connected to the internet, with the ability to transfer and share data and information with each other. It has become a common term in recent years as technology has developed to allow for this advanced merging of physical and digital infrastructure. In 2005, alongside the increasing use of IoT, the rail industry started pursuing more technology-based projects that allowed for the major development of smart solutions that included automatic ticketing, rail analytics, dynamic route scheduling, and planning to name just a few.

For the operations and maintenance of railways, IoT are made up of connected solutions and transport infrastructure.

IoT are enablers of the following services:

These IoT solutions require integrated software and wireless connectivity to allow for a high rate of data transfer, in order to optimise asset use and improve the service efficiency. IoT data collected from the above services are processed to improve the response time to maintenance needs. Furthermore, real-time information informs more intelligent and safer resource allocations and operations, thus improving the productivity of railway maintenance.

The desired outcome of IoT use in rail operations and maintenance systems, is to improve the efficiency of operations and minimise the time and effort originally employed for identifying malfunctions and alerting engineers. A fully automated system for maintenance would be ideal, where an issue is identified and communicated to the service provider and maintenance staff immediately, without human interference.

Legislation and regulation: Governments, and specifically the transport sector, need to determine the scale of the IoT system for railway operations and maintenance, considering whether it will be implemented as a national system, developed for each individual state or applied individually to each railway line or station. A larger scaled system will allow for a holistic view of the country’s transport networks, however, could prove complicated for data processing without effective integration. Governments need to outline the requirements for security and safety, including the minimum standards that must be met by IoT systems. Additionally, they should provide a future goal for the system, to encourage continued development of the system, by the IoT providers and station operations.

Transition of workforce capabilities: Instead of monitoring operations and identifying areas that require maintenance, employees will now need to be trained in managing and maintaining the IoT system and solving malfunctions and security risks that may occur during operations. Furthermore, maintenance employees should be trained to use the digital services that are connected and communicated through the IoT system, allowing for their immediate response to technical maintenance requirements.

Funding and financing: A benefit realisation should be performed so that the government can understand the investment and funding they must provide to enable the IoT data to be transferred and used adequately by the rail operating and maintenance systems. The IoT technology and system costs should be costed in the operators offer as part of the provision of their managed services. 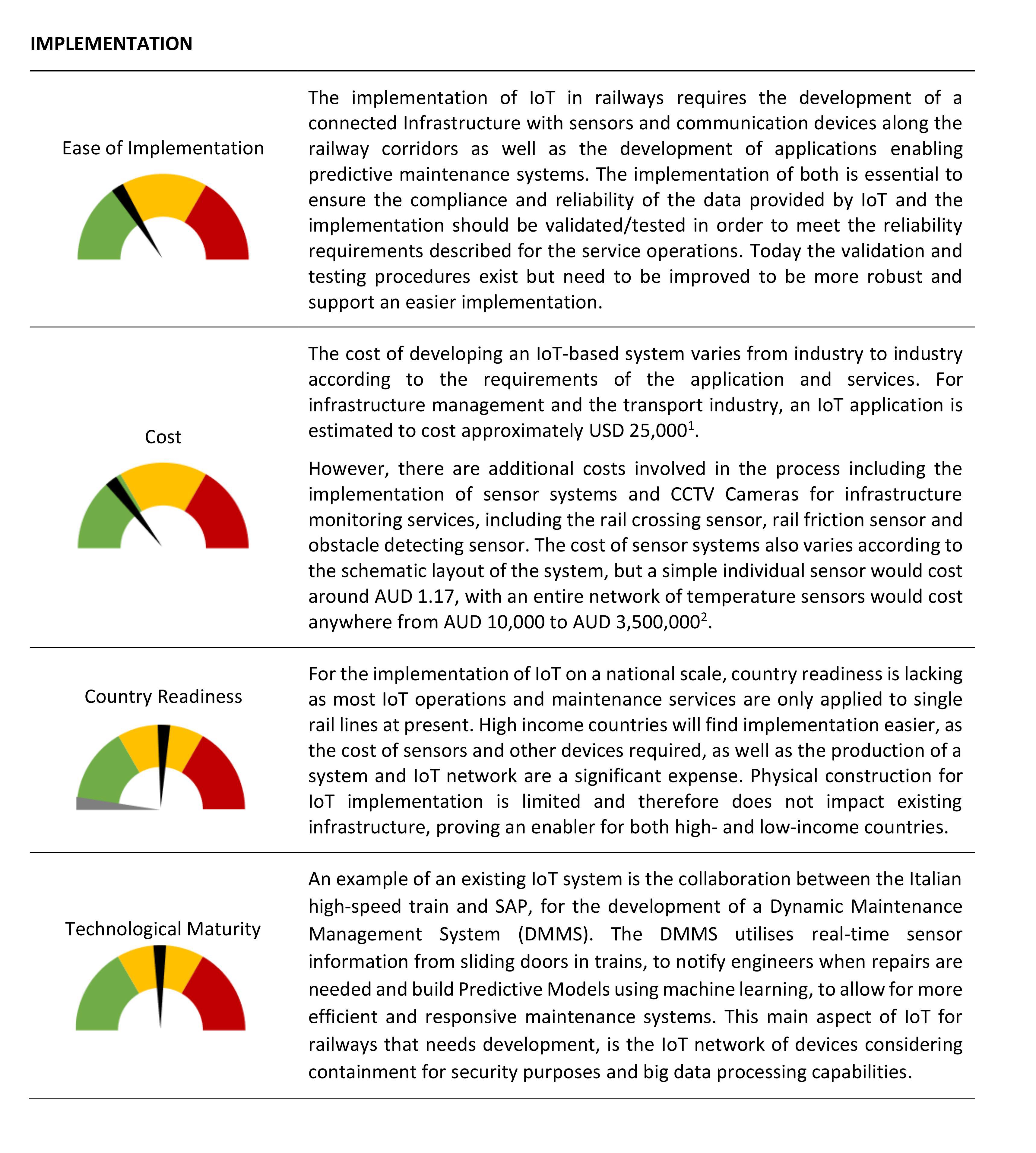 Risk: With the use of many devices within one system, the system network and integration of services will become complex as organisations attempt to manage multiple Internet Protocol (IP) addresses, process large volumes of data, and manage complicated IP infrastructure. Additionally, as automated controls and workflows are added to the system, IoT data outputs will increase, which for a static system could cause a disturbance and imbalance. IoT systems also consist of thousands of sensors and devices that can be hard to manage.

Mitigation: Network infrastructure will need to be developed to allow for this complex system integration and data processing, and networks should be able to scale to accommodate the addition of workflows and controls. Automatic onboarding needs to be implemented in order to allocate devices to the appropriate networks and enable governance and visibility during the device lifecycle.

Risk: The implementation of IoT for maintenance and operations will replace jobs that would otherwise be undertaken by railway service employees. This will of course have an impact for the individuals affected but may also prove to be broadly unpopular within the wider community.

Mitigation: To avoid the public rejection of the new system, existing employees should be re-trained in other tasks such as using the IoT operating systems, maintaining the devices used such as sensors, CCTV and the data output programs.

Risk: The integration of numerous sensors and devices provides an opportunity for hackers to break into the system and steal important information, such as private government and transport information. This is especially prevalent for IoT systems as the “network attack surface” is increased drastically due to the abundance of devices creating numerous vectors or pathways for entry. Furthermore, the individual devices are generally manufactured by companies without relevant security requirements considered.

Mitigation: Service providers must ensure that processes to protect sensitive information are implemented, and that all IoT devices used are compliant with the general security properties implemented.

Timeframe: Collaboration with PARC began in 2013 and 20+ fleets were planned to be running by March 2018.

Cost: AUD 70 million for the IoT and the system development

Timeframe: The testing and project start date was in 2018.