Dynamic Pricing for Roadways and Parking

The dynamic pricing of roadways and parking spaces is the practise of varying the price of a toll or fee that reflects the changing demand on that infrastructure. During a period of heightened demand, the price to use the relevant infrastructure would be higher. Prices are usually fixed based on time of day, with higher prices applying during peak travel periods, but can also be fully dynamic, fluctuating in real time with demand. Similar examples of time-based utilities pricing are in place across the energy and water sectors. With the rise of “Smart” and Internet of Things (IoT) devices, dynamic pricing may go as far as influencing when we perform household chores, like using the dishwasher, to align with higher supplies of wind and solar power, when prices are at their lowest.

For parking, dynamic pricing balances the demand for parking during a period, and the proximity of the parking to a given area such as an urban centre.

With urban areas becoming increasingly congested, city planners are seeking solutions that can address demand in a way that does not require the expansion of road and parking infrastructure. Dynamic pricing is a tool for traffic planners to manage traffic demand through pricing.

When parking fees and road tolls are static, they have a limited influence on peoples’ travel decisions. This inevitably leads to congestion, as citizens continue to drive during peak hours and to park as close to their destination as possible.

By implementing a variable price, value varies throughout the day in line with demand. This motivates users to shift from using their privately-owned vehicles to other transport options, as tolls and fees during peak periods may no longer be cost effective for them. Conversely, outside of peak times when utilisation is low tolls and fees can drop to cost effective levels, encouraging use. The benefits are a better management of congestion and road capacity, and improved travel time reliability. With less congestion, those who must travel by road (e.g. emergency services, freight and delivery, tradespeople) have shorter and more reliable travel times.

The most recent examples of dynamic pricing systems utilize technology to maintain free-flow travel speeds and minimum traffic density. A dynamic tolling algorithm considers local factors and recalibrates toll rates based on traffic congestion every few minutes; with the toll rate locked in from the time a user enters the corridor until they exit the corridor. Users can utilize electronic payment systems through either an In-Vehicle Unit, or “tag”, provided by toll service providers (e.g. TollTag, TxTag, EZ TAG), to facilitate the use of the corridors and make payment, or simply through post-pay billing achieved using automatic license plate reading technology.

The technologies required include a multitude of roadside equipment including, cameras, toll tag readers, dynamic message signs, roadway weather stations, air quality monitoring, over height detection systems and vehicle categorization technology.  In addition, there is also a significant back-office system which is composed of a data warehouse, a business intelligence processor and a toll setting module with the algorithm. Connecting the back office and field equipment is a network communication system.

When applied at scale, dynamic pricing can also become a revenue generation mechanism for governments. This is particularly important given the forecast rise in electric vehicles (see also the Electric Vehicles use case) which is expected to impact tax revenue from fuel.

Dynamic pricing is designed as a demand management tool to encourage a change in travel behaviour of citizens, which can result in a mode shift towards public or active transport or may prompt changes in behaviours such as working from home or travelling outside of peak hours. It is therefore a strategic tool to modify the behaviour of citizens and should be implemented in parallel with investment in public transport (e.g. light rail) and active transport infrastructure (e.g. bike lanes and walking paths), and be integrated with real-time traffic management, to ensure citizens have an alternate, cost effective, and reliable means of travelling.

Additional charges are also being introduced for non-green or high emission vehicles and/or limits are being placed on the extent to which fees are discounted for these vehicles during off-peak times.

Legislation and regulation: Political will is key to implementing dynamic pricing schemes. In New York in 2007, a lack of political support for the introduction of congestion pricing (location based Dynamic Pricing) meant the scheme was abandoned. Conversely, while 80% of Sweden’s residents were in opposition to introducing a similar scheme, the Swedish Parliament opted to conduct a congestion pricing pilot program which proved the economic, social and environmental benefits of the technology, so much so that Stockholm residents voted in a referendum to make the system permanent, and later to upgrade it to a dynamic pricing system (which increased the highest fee).

Effective institutions: Each city’s or region’s scheme must be tailored to and evolve based on localised transport policies and desired outcomes. Where the city aims to optimise the entire transport network, a network wide charge should be implemented. Conversely, a location-based congestion charge would be more suitable if the aim is to reduce congestion in a specific area, such as the city centre. The governing body should lead the review and update of the price banding on a regular basis, utilizing predictive pricing rather than reactive. Pricing levels should reflect the changes in traffic flows and citizen behaviours based on time of day and year (e.g. during major holiday periods). A mature system will respond in real-time to traffic conditions.

Transition of workforce capabilities: From an authority point of view, specialised ITS and price/fare structure specialists should prepare the scheme’s main characteristics in line with policies. From an operational point of view, traffic operating centres should train their staff to monitor and track the dynamic pricing tools over time.

Funding and financing: These pricing schemes can be publicly or privately funded but are usually piloted in the first instance by government so the local authorities can gather relevant data on a smaller scale to understand user behaviours in response to the scheme before rolling the scheme out to a larger geographical area and user base. In Stockholm, London and Singapore, the upfront costs of implementing the system, and the associated public transit improvements, were recouped in less than 5 years and many private road operators have also implemented dynamic pricing mechanisms as part of their concessions.

Procurement and contract management: While it is possible to develop a pricing scheme in house, public authorities can contract out some services to vendors whilst keeping the day-to-day management activities in-house. It is also possible to contract the entire development and management of such a system out to a contracting entity. This will depend on how and where the dynamic pricing scheme is implemented and the objectives of the public authority. Existing and future road corridor concessions to private sector participants can include dynamic pricing where tolls are to be collected. 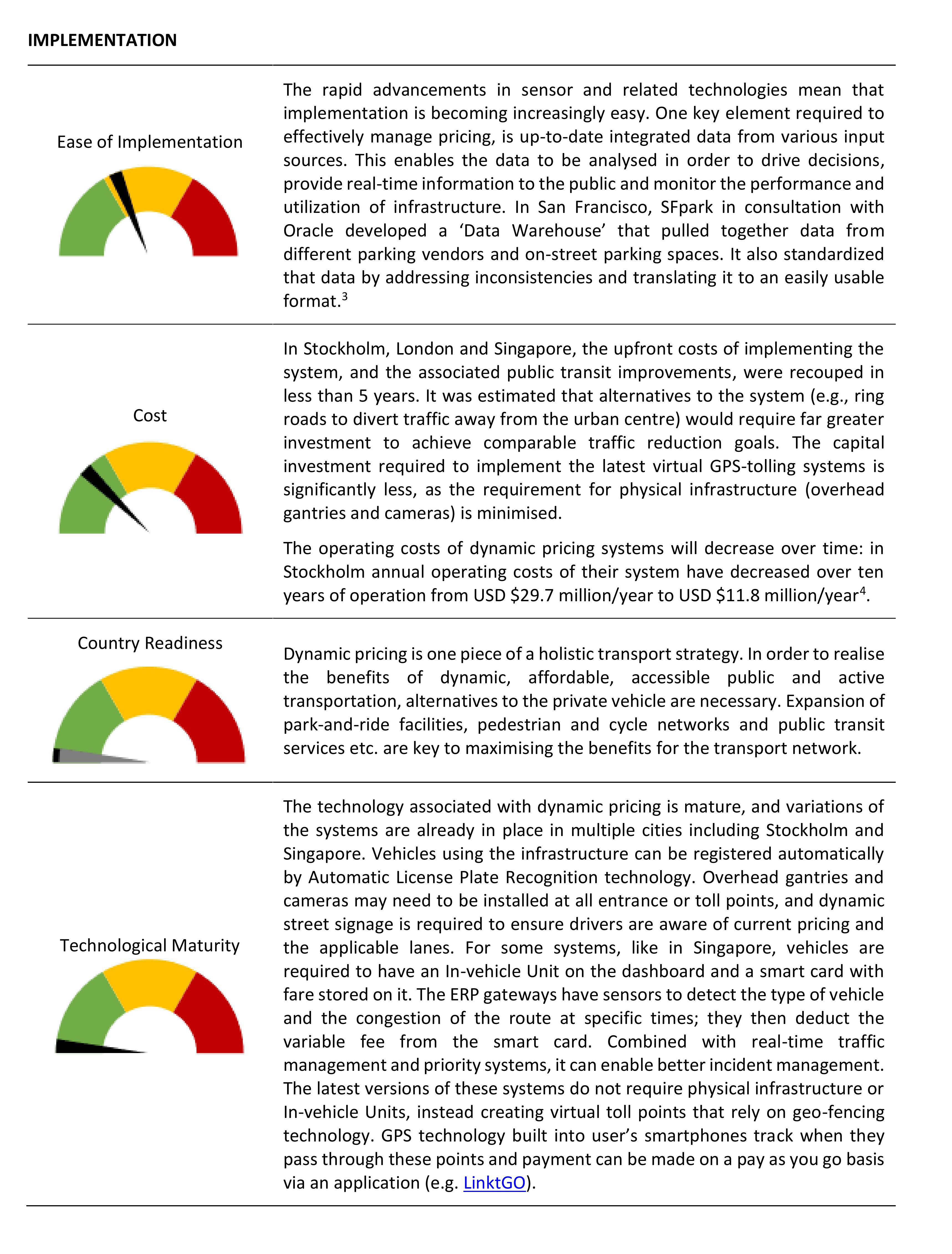 Risk: To encourage mode shift, the fee must be significant enough to change driver behaviour. However, implementing the wrong fare structure or increasing applicable fees rapidly may place too much pressure on an unprepared public transport infrastructure, which might not be mature enough to cope with demand.

Mitigation: Appropriate infrastructure planning and development should be undertaken to ensure the public transport infrastructure and services offered are sufficient to provide an alternative to driving. It is important for governments to consider their transport network holistically.

Risk: Public opposition to the implementation of such a system is a real risk, particularly if it is perceived that revenue gathered from the system is simply another tax that the community does not see any benefit from. Where the public transport infrastructure is not widely developed to offer alternatives to driving, such taxation models should consider these elements and be designed to provide adequate public value to all.

Mitigation: Dynamic pricing must offer a direct value to drivers such as ease of use; predictability; faster journey times; cost savings. Furthermore, there should be perceivable benefits to the community at large. In Sweden, a publicized trial resulted in a significant change in public attitude towards the system as environmental improvements were immediately realized. In Singapore and London, public consultations and education programs were conducted to build commuter awareness and explain the benefits the system would have on the community. Furthermore, a key aspect of London’s strategy was to ensure, by law, that all revenue raised was reinvested into London’s transport infrastructure. This, therefore, demonstrated that the fees paid by drivers had a tangible impact on the community, and ensured citizens across socioeconomic levels would benefit from the scheme.

Risk: In some regions, Automatic License Plate Recognition technology is increasingly being considered as a risk to data privacy, with multiple jurisdictions enforcing restrictions on the use of data collected by these technologies (including its use and the length of time it can be stored for). Without the use of such technology, the dynamic pricing system would be less automated and reliable.

Mitigation: As with many other technologies, the system and user data recorded must be captured and stored in a secure and reliable way to ensure the data protection of individuals. A public education campaign that outlines the regulations around data handling and storage would assist in mitigating the public’s reservations.

Implementation: The Dallas-Fort Worth region utilises managed lanes (e.g. HOV lanes) to manage highway demand and to fund the expansion of the transportation network.

Cost: The managed lane corridor has seen 20% more traffic (after installation) and the general-purpose lanes have seen a 70% reduction in congestion due to improved design of the roadway and traffic that has shifted to the express lanes.

Implementation: The cordon scheme uses automatic number plate recognition, in a 35 km2 zone. The scheme was launched in 2007 after a successful trial in 2006. In 2016 the scheme was updated to a dynamic pricing system based on time of day.

Implementation: The ERP scheme is fully automatic on specific routes, times of day, and directions, with variable pricing designed to respond to congestion in real-time. Vehicles are required to have an in-vehicle unit on the dashboard and a smart card with fare stored on it. Overhead gantries detect the type of vehicle, the congestion of the route at specific times, and deduct the variable fee from the smart card. The scheme was launched in 1998, replacing a cordon pricing scheme that was first implemented in 1975.

Implementation: Example of a smart parking initiative combined with dynamic parking pricing in San Francisco. Began as a trial and subsequently rolled out city wide.

Cost: SFpark was funded primarily from a USD $19.8 million grant from the U.S. Department of Transportation’s Urban Partnership Program.

Timeframe: The trial took place in 2010, with permanent implementation of the scheme going into effect in April 2011.

Showcase Projects
InfraTech
SmartCities-as-a-Service
The Smart Ivrea Project (SIP) envisages the design and implementation of a sustainable, inclusive and technologically advanced city where public services, energy and economic efficiency and social inclusion are the center