Drones are unmanned aerial vehicles (UAVs) that can be remotely piloted by a human pilot, or autonomously operated. They can be configured as quad-copters or hexa-copters, or as fixed-wing unmanned aircraft. Drones have been used for military applications for more than a decade. Today, drones are quickly being adopted by the commercial and private sector, as well as in people’s everyday lives. This rise in popularity is leading innovators and decision makers to investigate the potential uses for this unique technology offering.

The use cases for drones are potentially endless. They offer a safe, cost effective solution to an array of previously time consuming or high-risk tasks typically performed by humans. Some of the specific opportunities for drone use in the Transport and Energy sectors today include:

Drone technologies can enhance the process to inspect assets as the photos they take have a very high resolution, sharper than the human eye, and provide an opportunity for review multiple times. These photos can be used to gain a high-quality perception of the condition of assets. They also enable enhanced safety and security through persistent and flexible surveillance coverage of the transport network and can provide rapid-response when a security-related incident is detected.

Drones can also be coupled with sensors to collect data. Today’s drones can be considered as Internet of Things (IoT) devices as that operate over Wi-Fi. They can share data with other IoT devices and systems and can provide real-time data as an input into ‘big data’ applications. This enables faster, more accurate enterprises, decision-making and analysis in terms of service offerings and infrastructure improvements, as well as acting as an enabler for more effective asset-related decision making.

As technologies advance, so will drones’ ability to perform increasingly complex tasks. One such example is that it is expected for drones to have the ability to recognize faces, enabling them to identify people. This will of course pose issues relating to people’s privacy and reliability of this facial recognition technology.

Legislation and regulation: For many countries the regulation of drones has been managed as an extension of existing regulatory frameworks for the aviation sector. Drones are restricted to segregated airspace, prohibited from built-up areas, such as protected zones near airports and military installations, and must be operated within the pilot’s line of sight. These regulations are generally considered too restrictive and an impediment to innovation. Enforcement mechanisms are also inadequate. To unlock the wide range of benefits drone technology can offer, existing regulations will require scrutiny and new safeguards for the screening and clearance of drone operators and effective encryption, or cybersecurity protocols, should be enacted.

Transition of workforce capabilities: Infrastructure operators may not be prepared or have the capabilities in-house to analyse the data and images collected by the drones or operate and maintain the drones themselves. A structured training and skills development framework should be developed to enable the workforce to upskill in response to the new requirements.

Governments can assist in developing these skills by encouraging or mandating their inclusion as part of school curriculums as part of a long-term plan to facilitate drone skills development. 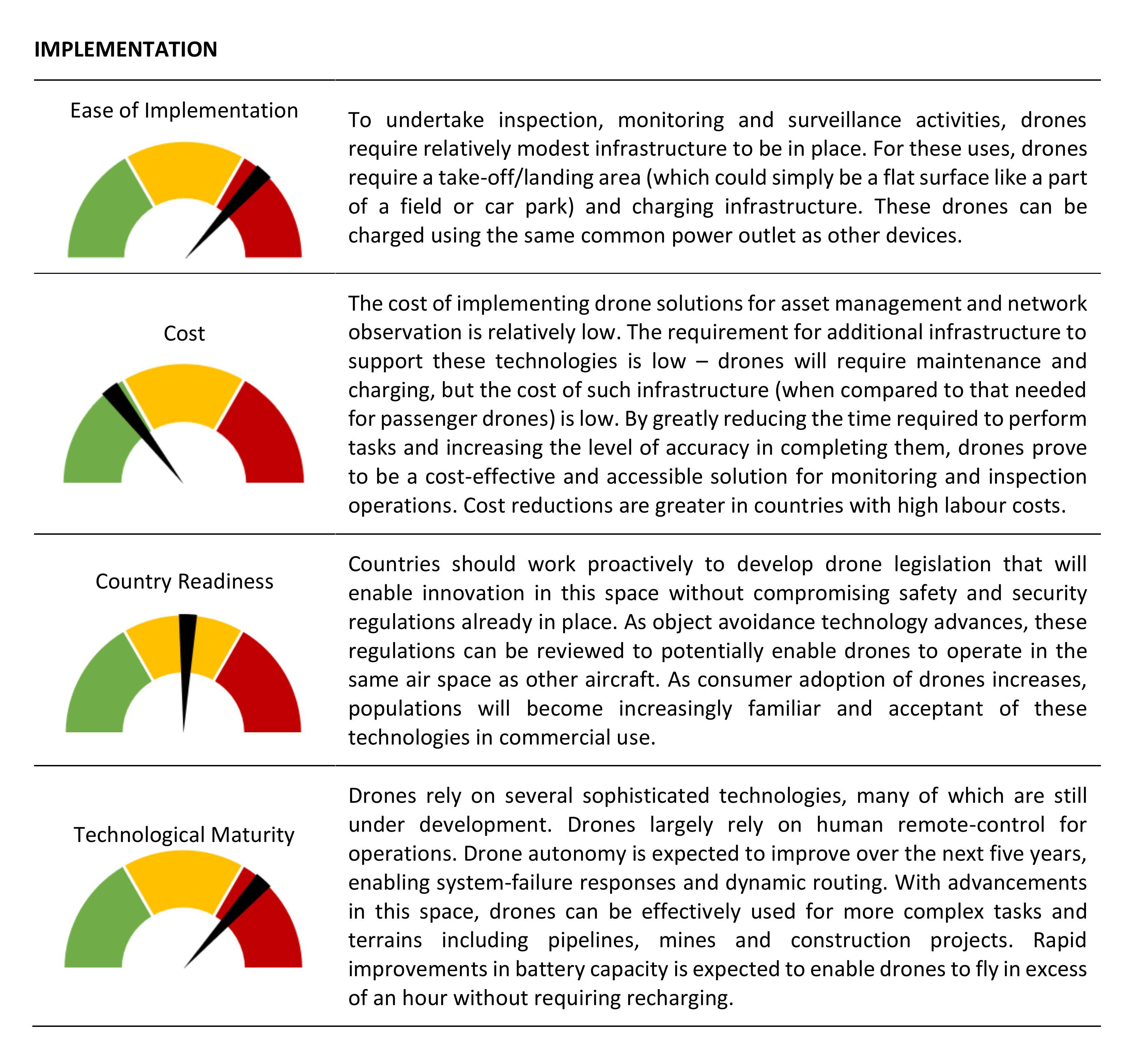 Risk: In order to generate the value expected for more efficient monitoring, surveillance and inspection of infrastructure projects, setting the operating plans, getting the relevant permits to operate the drones and the qualified staff are key elements to successfully implement drone-related services. If these three elements are not properly developed, there is a risk that services implemented will not capture the relevant surveillance data.

Mitigation: Experienced drone pilots should train the future drone operating staff, and specific operating licences should be delivered (as it is the case today by the Australian Civil Aviation Safety Authority (CASA) for Remote Pilots). A specific planning of the drones-services operations should also be made according to the expected outcomes and surveillance regime and frequency expected.

Risk: As with other digital technologies, drone usage raises ethical and legal questions surrounding how data collected should be used and whether and under what circumstance this data can be shared with government authorities for purposes other than those for which the data was collected. Privacy concerns would be particularly relevant for citizens living or working in proximity to monitored areas. There is also the potential that drones will create noise pollution.

Mitigation: Citizens should be made aware of drone operations and their purpose to address their potential safety and privacy concerns. Appropriate regulation and practices concerning overflying, data use and data storage will also be required.

Risk: Drones will operate in contested electromagnetic environments, consisting of many potential emitters, which can impact safe operation. Weather and high airflow environments can also result in unpredictable behaviour in drones. Satellite positioning system denied environments and system outages can also impact drones as they rely on satellite systems for position reporting and autonomous navigation. Such environments include bridges, tunnels and deep cuttings with limited view of the sky.

Mitigation: Selection of suitable aircraft should take these potential disruptions into account to ensure safety and reliability. Furthermore, the security of the technology and data from cyber or other hostile attack must be assured. Overall drone technology should reduce safety concerns as these can be used to curb vandalism, theft, trespass, assault on staff and customers, terrorism and sabotage.

Risk: Drones will need to operate safely within the context of a range of fixed infrastructure and the natural environment and operate without disturbing local wildlife. The risk of collision or obstructions to the drone’s visual line of sight must be managed. These risks are exacerbated by variable weather conditions.

Mitigation: Sensitive planning must be undertaken to avoid unwanted interactions with wildlife.

Implementation: Systra was engaged to perform a pedestrian and traffic monitoring trial during the Melbourne Grand Prix 2019. The aim of the trial was to assist Yarra Trams in understanding the operational issues that occur during large disruptive events in the city.

Implementation: Indian Railway is using drones for the first time to inspect and assess the progress of a mega rail project.

Cost: The drone was hired from a private operator and cost 3,000 Indian Rupees/km (approx. 40 USD/km) for undertaking the aerial survey.

Timeframe: The drone was used on a trial bases for three days cover the total 98 km on the DFC. A status report then prepared based on an analysis of the video recordings.

Implementation: SNCF is using drones to improve network performance and operations. The drones are equipped with airborne laser scanners that produce high-density 3D point clouds (LIDAR) that can be used across several tasks including inspections of assets and network mapping.

Cost: The drones were developed by SNCF subsidiary Altametris. SNCF’s drone projects are part of a €14M/year budget for rail network innovations and monitoring projects. Altametris has developed successful automated surveillance management solutions using drone data and has since then shared this knowledge with other operators.

Timeframe: SNCF has been using drone technology since late 2012. It has since established a subsidiary, Altametris, to offer its expertise in using drones to other infrastructure managers.