Autonomous Vehicles (AVs) or Driverless Vehicles are a new vehicle mode which can sense their environment and operate safely without human input or control. AVs can move and guide themselves without human direction and have the capacity to respond to unexpected and hazardous situations.

Full automation (level 5) is the most advanced form of driving automation and will form the basis of this use case. There are several uses of autonomous vehicles today, such as in public transportation (e.g. Sydney Metro in Australia) and for commercial purposes (e.g. mining trucks and freight trains). This use case concentrates on autonomous road vehicles (cars, trucks, buses) and their future integration into the existing road traffic network.

The fully autonomous vehicles that are being developed today combine several technologies including GPS and sensors (cameras, radar and lidar). The sensors collect the necessary information to enable the vehicle to drive safety. Camera sensors can visualize objects on the road and give the AV a 360° view of the external environment. The sensors automatically detect objects (pedestrians, vehicles, traffic signs etc.), classify them, and determine the distances between them and the vehicle. Short- and long-range radar (Radio Detection and Ranging) sensors send out radio waves that detect objects and assess their distance and speed in relation to the vehicle in real time. Short-range radar is used for blind spot monitoring, lane-keeping assistance, and parking aids, long-range radar is used for automatic distance control and brake assistance. Alternatively, lidar (Light Detection and Ranging) sensors can be used instead of radar, to create 3D images of objects and their surroundings. Using lasers, they can create a full 360° map around the vehicle instead of a narrow field of view.

AVs are connected Internet of Things (IoT) devices that can communicate with other connected devices such as other vehicles (see also the Vehicle to Vehicle (V2V) Connectivity Use Case) and roadside infrastructure (see also the Vehicle to Infrastructure (V2I) Use Case). These connected devices can share information to achieve greater traffic optimisation through an integrated package of V2I, including coordinated traffic signalling, speed and lane use management, traveller information (using variable message signs) and network intelligence (such as from vehicle detection equipment).

Once AVs are fully deployed on the road network, and a significant shift to AV adoption takes place, several benefits can be realized. These include, a vast reduction in the number of private vehicles on the road, as it is uncertain whether citizens will be able to afford their own private autonomous vehicle, instead they may be shared between users. This lessening of vehicles on the road would result in an overall improvement to congestion and vehicle emissions, particularly when combined with electric vehicles and run using renewal energy sources (see also the Transition to Electric Vehicle Transport Networks Use Case). Furthermore, this will prompt a reduction in journey times, which will particularly benefit emergency services and freight and delivery. There will also be an associated reduction in operating costs for freight services due to the elimination of human drivers. This could enable a reduction in the cost to consumers.

A second major benefit associated with AVs is the increase in road safety. Today, human error accounts for 94% to 96% of road traffic accidents in the US each year. Autonomous vehicles will eliminate this, by relying on several technologies to respond to hazards in the road. When combined with a wider Traffic Management System (see also the Real-time Traffic Management Use Case) including Weather Sensors (see also the Pedestrian and Weather Sensors Use Case), the vehicles will respond to real-time traffic and weather conditions to ensure a safe journey.

Before the widespread adoption of AVs takes place, there will be a period in which AVs must be integrated into existing general traffic and operate in conjunction with driver-operated vehicles. Once AVs become more accessible and their safety record is proven, it is expected that there will be a rapid uptake of AV vehicles, particularly if government incentives are put in place to encourage their use. This would thereby result in a shift in the ratio of vehicles on the road from driver operated to driverless.

AV integration strategies are necessary to account for safety, structural and logistic difficulties that will be encountered as AVs merged into general traffic. Adding a new mode of transport has the capacity to throw the network out of balance, therefore an integration plan accounting for pre-existing services needs to be developed.

Legislation and regulation: Governments must determine their stance on AVs and if they want to encourage their uptake in their regions. To do this, governments could implement a tax break for AVs, or introduce a new tax for vehicles that are not autonomous. Like traditional driver-operated vehicles, there are many regulations that determine their minimum safety requirements (e.g. road lights, crumple zones, airbags, seatbelts etc.). Governments will need to develop similar legislation for AVs, outlining all the features, particularly safety features) the vehicles will require and the safety standards the autonomous elements will need to prove they can meet, as well as requirements for vehicle servicing. Today, legislation around the world uniformly mandates that a physical driver must operate road vehicles. Therefore, governments should develop new legislation, in conjunction with manufacturers and the legal industry, to legalise AV use. Further questions remain: Will passengers require a driver’s licence? How old does a passenger need to be to ride in an autonomous vehicle? Can children ride alone?

Effective institutions: Governments should collaborate with AV developers to enable continued testing of their systems on public roadways. This is already underway in many regions. By working with developers, governments can ensure developers do not produce vehicles that would not suit their minimum safety standards and can set strategies for developing infrastructure in line with expected AV deployment, to ensure that road infrastructure is suitable for AVs to drive on.

Transition of workforce capabilities: In anticipation of AV adoption, roadside assist and vehicle service centres will need to develop skills to repair and maintain these vehicles. Governments could introduce training programs for the development of these technical skills, to ensure the coming generations will be able to meet this need. Road Transport Authorities will need to develop and communicate the rules around registration of autonomous vehicles, minimum service requirements, and any other changes to licencing requirements.

Funding and financing: Public/private alliances are the ideal means for achieving AV development and roll-out, with private technology companies providing the initial investment, due to governments outlining the technology prospects. A similar collaboration took place in the 1990s in the US, when telecom companies paid for fibre networks to be installed across public lands, due to negotiating rights with the government commonly resulting in access to new data networks. Once initial investments have been made, the project will be easier to finance as company and individual purchases of AV will provide the means for continued financing. 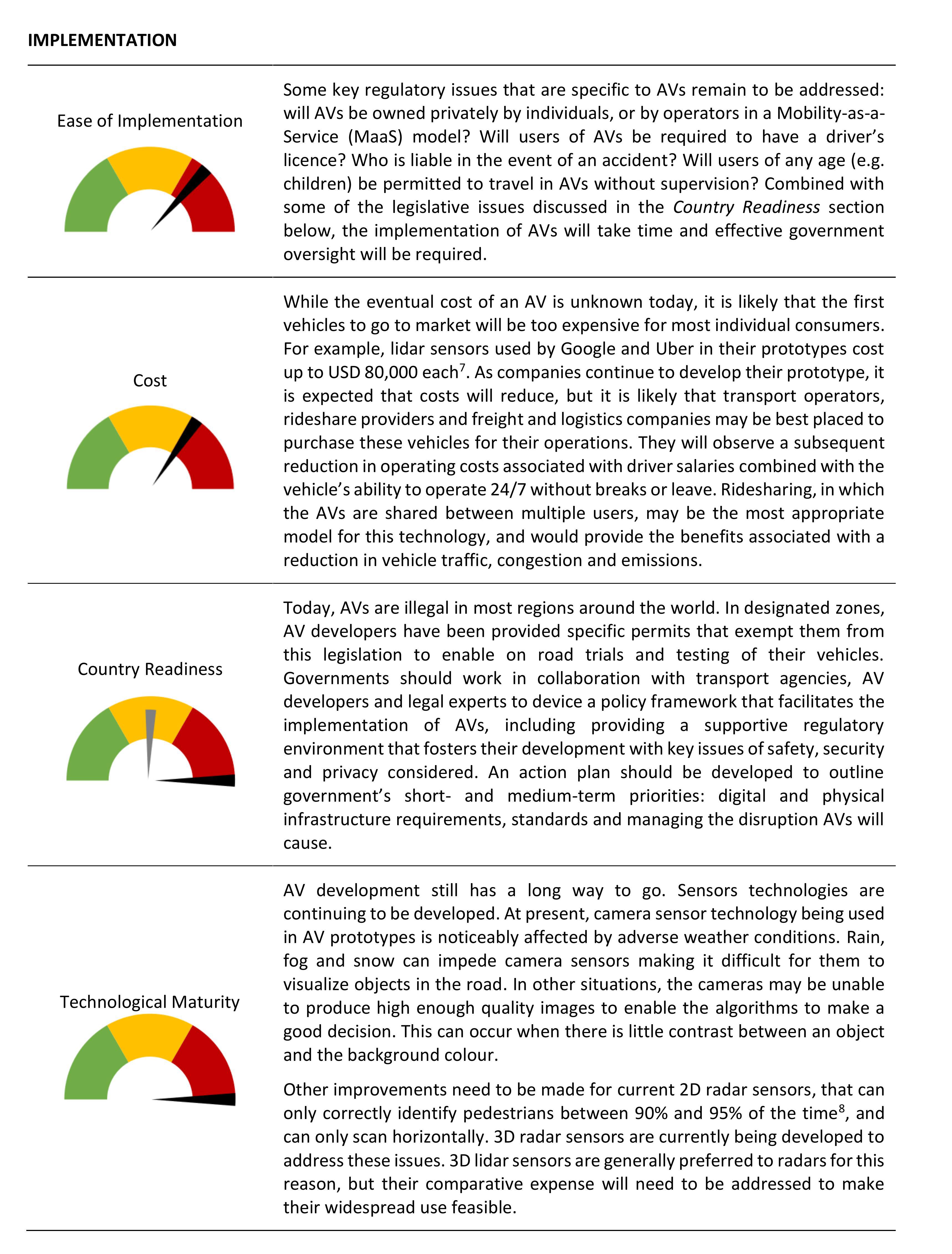 Risk: Several structural and operational difficulties could be encountered when integrating AVs in the existing road network. There is also the risk that congestion will build up and roadside parking bays and drop off points, as passengers look to be dropped off.  There is also the risk that citizens will choose AVs over pubic transport, therefore effectively increasing congestion.

Mitigation: Roadway designs must be developed to enable AVs interpret road markings and signs e.g. by implementing electronic markings, as well as providing wireless internet connections within tunnels. In response to an increased demand for curb-side drop off, additional passenger loading areas should be provided and street-parking (Refer to the Smart Parking and Dynamic Pricing use cases) should be managed effectively to increase turn-over. Parking stations will need to be developed in order to satisfy the requirements of AVs, including electric chargers and vehicle cleaning and maintenance services. Additionally, the AV integration stages must ensure that existing public transport services are not neglected but rather complemented by this new system, for instance through the construction of AV drop off bays at train stations.

Risk: Users may be uncomfortable and untrusting of AVs and this may affect user acceptance. Additionally, unless AVs develop rapidly in such a way that enables their improved affordability overtime, they may only be available to high socioeconomic brackets.

Mitigation: Gradual integration of different levels of automation, coupled with community education, could be utilized to familiarize users with vehicle autonomy and make them more comfortable with using the technology. To mitigate the risk of AV unaffordability, continuous investment into technological development should take place, to ensure vehicles of various cost are developed.

Risk: AVs could be at risk of cybersecurity attack such as sensor jamming, distributed denial of service attacks (DoS/DDoS) and forged vehicle communications. Such attacks would present a safety risk as they would interfere or impede the vehicles technologies compromising the algorithms ability to make good decisions.

Mitigation: Governments and AV developers need to ensure that the vehicles and the wider IoT system is completely secure to reduce the risk of hackers. Potential solutions to address this could include developing safety protocols that put the vehicle in “lock-down” mode when threats are identified and the sharing of security concerns via V2V communications. Artificial Intelligence could also be deployed to detect malicious activity by analysing anomalies in the vehicles data. AI could alert the driver and vehicle manufacturer to the attack and/or “learn and prevent” the attack itself by telling the vehicle to ignore incoming rogue commands.

Risk: Prediction for AVs vary widely and range from having the effect of reducing energy consumption by 90% or increasing it by 200%. For example, as travel by road will become significantly easier with the introduction of AVs, there is a risk that users may choose to use this mode more frequently and for journeys that they previously would have travelled by train or even a short flight. They may move further away from the urban centre, as the commute to work would be easier. This would result in an increase in the total number of miles/km travelled by road vehicles.

Mitigation: Government legislation is the key to ensuring the introduction of AVs into the road network is done in line with overarching transport, urban planning and environmental objectives in mind. Possible solutions could include programming vehicles to choose the most fuel-efficient route or introducing legislation that penalizes unoccupied vehicles or reward users that let their vehicles be used for ridesharing.

Implementation: The ‘Driven’ program conducted an AV trial in a ‘complex urban environment’ to test the vehicle’s ability to integrate with traffic.

Cost: The program is a GBP 13.6m partially government-funded consortium.

Timeframe: The first passenger trials for a separate Addison Less venture are due to start in June 2020. 10-12 years are estimated for full itnegration of AVs into general traffic in London.

Implementation: The state’s Department of Motor Vehicles announced a proposal that provides a permit for companies wishing to test or deploy driverless trucks for commercial use on California roads. There are currently 65 companies permitted and over 670 autonomous vehicles that are licensed with the DMV.

Timeframe: The legislation was first proposed in April 2019 and came into effect in December 2019.

Implementation: Trials for driverless vehicles took place at the Perth Airport facility in 2019. These vehicles use RADAR to help navigate roads without human assistance.

Director of the Autonomous Transport Program