Autonomous Shipping Ports can utilize some, or all, of the following five main components to deliver more efficient, productive and safe port operations:

The movement towards autonomation has been seen in other industries including mining and warehousing, where similar repetitive, time-consuming, and often dangerous tasks are undertaken. For ports, the adoption rate has been slower. However, today more than 40 ports around the world have installed equipment to automate some, or all, of their processes, with 20 of those projects having occurred in the last six years. To date, an estimated USD 10 billion has been invested in such projects (including basic infrastructure and automation equipment), and an additional USD 10 billion to USD 15 billion is expected to be invested over the next five years.

Traditional operations at ports involve workers directly controlling machinery which can be time consuming, error prone and dangerous. Errors, damage or delays are costly and can cause knock-on effects further down the supply chain. Autonomous machines like automated robot cranes and vehicles can optimize the performance of specific tasks whilst reducing the risk of mistakes, accidents, injury and delay. Through this optimization, cost savings can be made for the operator associated with the reduction in time taken to perform tasks, reduction in damage to equipment and cargo, reduction in workforce injuries and enhanced asset capacity, which can enable cost savings at every level of the supply chain. They can also create less stressful, more comfortable and ergonomic environments for workers who will typically oversee operations from a look out post.

When upgrading a port to autonomous operations a holistic view of port operations is taken, that enables the optimization of tasks to be coordinated holistically, rather than siloed.

In the mining industry, autonomation has resulted in a 20% to 40% improvement in costs and productivity. For warehousing, a 10% to 30% improvement has been estimated. Shipping ports are similar settings in that the physical infrastructure is fixed and predictable and the activities performed on site are repetitive and uncomplicated. The operations can generate a large amount of data that can be collected and processed to provide value in efficiency gains and optimization. Furthermore, by introducing autonomous technologies, employees can be distanced from high risk activities that often result in accidents and injury. This also significantly reduces the number of disruptions or errors. This suggests that ports would be able to benefit from similar efficiency gains as demonstrated in the mining and warehousing industries.

The Port of Rotterdam in the Netherlands is one port that has already made the movement towards autonomation. It saw a reduction in congestion as a result of eliminating lengthy processes previously undertaken. The Chinese Port of Caofeidian saw a reduction in labour costs by 70% combined with a 30% increase in efficiency. Automation can improve efficiency by increasing the utilization of assets (cranes, trucks, berths etc.) and allowing for extended periods of operation. Automated machinery can perform consistently at peak performance, minimising distraction and fatigue.

Autonomous ports also require less space than traditional ports. By reducing the number of staff required on-site the space needed for facilities such as dining halls, locker rooms etc. is reduced. This space can be utilized for another purpose. As tasks like the ship to shore movement of containers can be completed in a reduced amount of time, thanks to automation and machine learning, ships will moor at the port for shorter timeframes. This will enable more frequent turnover of ships and means the port can have less space designated for berthing ships. It also means the idling of ships waiting for a mooring space will be reduced or eliminated, meaning less fuel consumption and a reduction in environmental impacts.

Furthermore, port operations will require less space as safety clearances will be reduced since humans are not directly involved. This means, overall the port can be condensed into a reduced space, or the existing space can be used to enable an increase in capacity.

In the future, the port’s role could grow from managing its internal operations, to functioning as an intermodal logistics hub that connects all the players in the chain. Autonomous ships and IoT enabled smart containers would communicate with the port to provide real time arrival and condition information. Ports would communicate with autonomous ships to enable docking in often crowded ports, and optimize unloading, storage and onward delivery via the automated cranes and vehicles at the port. Infrastructure for other modes (e.g. rail, unmanned aerial vehicles) would be integrated in the hub, enabling automated machines to move freight to the next mode/stage in the supply chain more easily as part of their operations. Autonomous vehicles could collect freight from ports and transport goods by road (see also the Autonomous Vehicles Use Case), rail, or air and could ultimately be delivered to the end customer by a drone (see also the Unmanned Aerial Vehicles for Freight and Logistics Use Case). To achieve this holistic system will require collaboration between all players, with the terminal operators, trucking companies, railroads, shippers, logistics companies, and freight forwarders connected into one ecosystem.

Legislation and regulation: Many ports are privately operated and are required to comply with government regulation, such as agreed capacity limits (based on several factors such as channel depth and competition with other ports). With the increased efficiency of automated ports, some of these regulation may need to be revisited, including safety regulations to support the transition to autonomous machinery at the ports.

Transition of workforce capabilities: A key problem facing ports as they make the transition to autonomous operations, is finding resources with the required specialized technical skills to undertake this type of project. It can take multiple years to train engineers to meet this need, particularly in the planning and implementation phases. Operators should make this a central focus if they intend to transition to autonomous operations. Training programs for existing staff, as well as increased efforts to recruit talent should be undertaken.

Funding and financing: There are several private funds for projects around the world. For example, a private company (DP World) invested in the upgrade of Port of Brisbane, Australia. Several private companies have partnered to transition the Port of Caofeidian in China to a fully autonomous port. 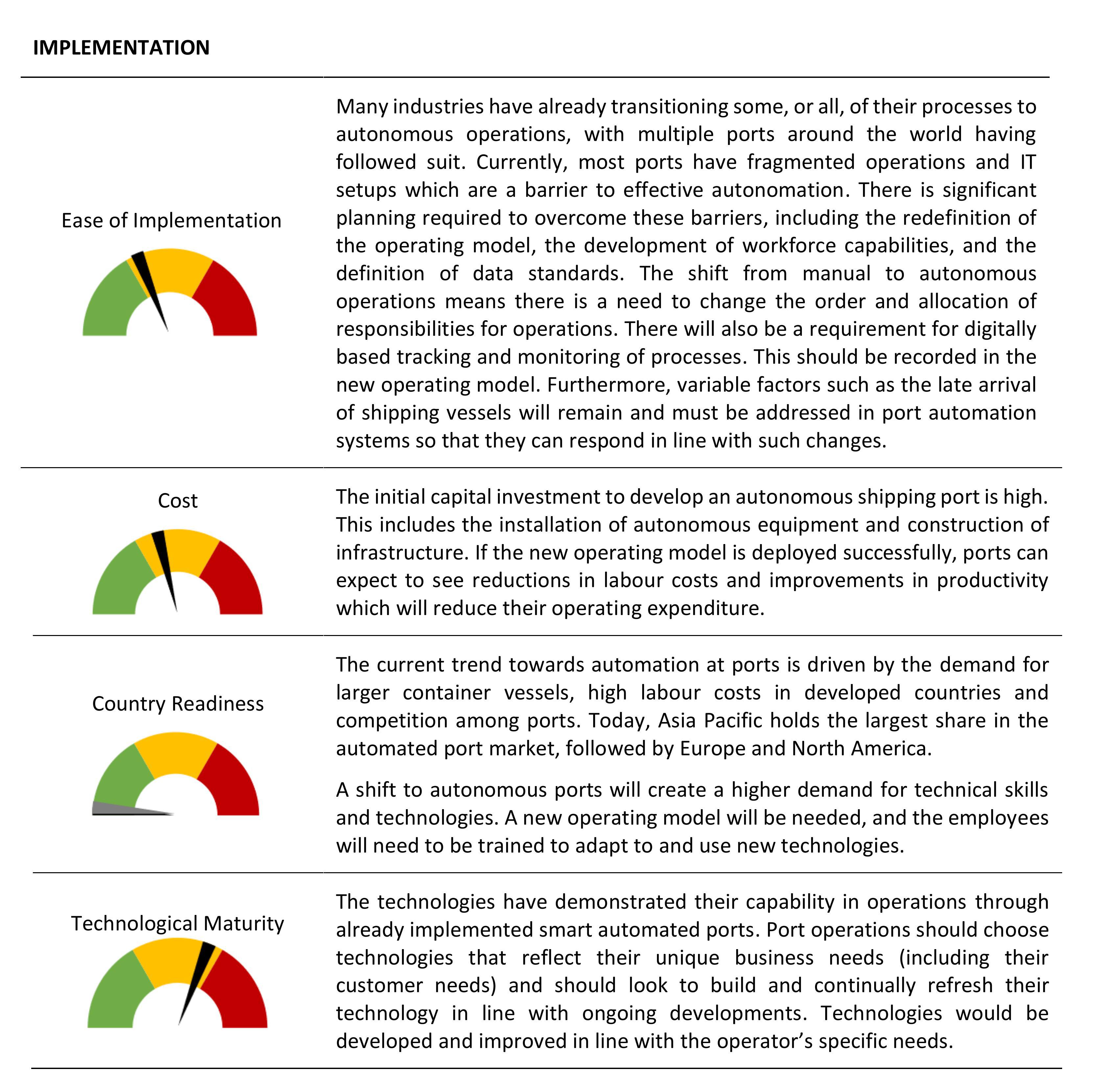 Risk: Some ports that have rolled out autonomous technologies across some, or all, of their operations, have recognized a reduction in productivity in comparison to their traditional operations. To justify the capital expenditure, it is estimated that ports should see at least a 25% reduction in operating expenses or a 30% increase in productivity[1].

Mitigation: There are several major barriers to achieving the expected return on investment. These include workforce capabilities, data quality, siloed operations and the management of exceptional events. Considerable planning and effective management are required to ensure these barriers are addressed in order to see the desired outcome.

Risk: The implementation of autonomous technologies may result in redundancies for existing employees.

Mitigation: With the new technologies installed, work at the port will become more technical. There is an opportunity to upskill some employees to meet this need. Furthermore, as automation will reduce the cost of shipping, an increase in shipping can be expected. This could offset job losses.

Risk: Autonomous shipping port operations are heavily reliant on data to optimize their processes. There is a cybersecurity risk to the system which puts the data collected at risk as well as operations and employees on site, who may be injured should the machinery be interfered with.

Mitigation: Operators should ensure their systems are robust to minimise the risk of cybersecurity breach. Furthermore, governments should set legislative frameworks to outline the requirements of these systems to repel cybersecurity attacks.

Cost: The 2004 – 2013 Maasvlakte II expansion of the port cost EUR 3 billion. The terminal has an initial annual capacity of 2.7 million TEU, which increased to 4.5 million TEU.

Timeframe: The terminal became fully autonomous in 2015. In 2019, the operator began developing a digital twin of the port, based on sensor data, in preparation for enabling the port to communicate directly with other autonomous systems e.g. autonomous ships. They hope to host such ships by 2030.

Implementation: The Port of Newcastle has developed the concept for an automated container terminal development at its Mayfield site. The site has capacity for a 2 million TEU per annum container terminal, coupled with a shipping channel that can accommodate vessels up to 10,000 TEU.

Cost: An estimated AUD 1.8 billion development to be entirely funded by private investors. It is expected to add AUD 6 billion to the New South Wales (NSW) GSP by 2050 and save NSW consumers AUD 4 billion in freight costs by 2050.

Timeframe: The concept was developed in 2019.

Implementation: The new port will utilize technologies including automated wharf and yard functions and full-electric automated guided vehicles. When complete, the port is expected to be the largest fully autonomous terminal in the world and will integrate with other modes including aerial modes.

Cost: The entire project is expected to cost more than SGD 20 billion (USD 14.5 billion). With the port's capacity almost doubling, more jobs are likely to be created despite the automation.

Timeframe: The port is being developed in four phases. Construction is currently in Phase 2 that began in July 2019. The port is expected to be completed by 2040, with the first berths scheduled to open in 2021.