This case study was jointly submitted by the World Economic Forum (WEF) and Antin Infrastructure Partners.

What is the problem being solved

The city of Nice in the south of France is continuously expanding, requiring additional urban space. A new district called “Nice Méridia” is providing over 500,000m² of space - mainly for housing, office space, retail, leisure, school, and a hospital.

In the context of climate change, scarceness of resources, and decarbonization, Nice Méridia is becoming a real-life showcase for a smart energy network, using geothermal energy, a district heating and cooling network, and a smart grid.

The following energy objectives had been defined:

In 2018 the Metropole Nice Cote d’Azur entrusted the company Idex with a Public Service Delegation contract over a period of 25 years to design, finance, realise, operate and maintain the production and distribution of heat and cold as well as to ensure energy efficiency by implementing a smart grid. Idex created a company dedicated to this project called Méridia Smart Energie.

The next major phase of the project will be completed in June 2021 when the geothermal powerplant will go on-stream and replace the temporary biogas powerplant.

What is the solution being developed?

The Smart Energy Network provides optimised levels of heat, cold and electricity to all users in the new Méridia district. This smart energy management is realised by Idex, which produces the heat and the cold, while electricity is produced by third parties.

The technical solution includes a district heating and cooling network (each of them 5.6km long), a geothermal powerplant (up to 10MW Pmax ), and smart grid supervision.

Technologies are used to aim for energetic self-sufficiency of the district and include:

Specifically, the heating and cooling networks allow a reduction in carbon emissions, control of consumption and increased safety for subscribed buildings compared to traditional boilers and room air conditioners. Heat and cold are produced simultaneously in a power plant via thermo-fridge pumps, which are supplied by geothermal energy from the alluvial aquifer of the Var valley. Using this technical solution, the energy efficiency factor is significantly higher than using fossil fuel or traditional electricity-based technologies.

The energy is transported to the subscriber buildings by a so-called primary network, where a heat and/or refrigeration exchanger distributes heat and cold to users via a so-called secondary network.

When user consumption is lower than production, energy is stored and returned during peaks of heat or air conditioning demand, thus optimizing the usage of the produced energy.

Artificial intelligence is at the heart of the network thanks to smart grid technologies; interconnected installations make it possible to collect consumption data and anticipate the energy needs of users.

Meridia Smart Energie's role extends to anticipating user needs and supporting them in controlling their energy bills. Energy storage and the smart grid make it possible to regulate the energy supply according to users' needs. The objective is to reduce consumption while limiting production losses, thus controlling the final energy bill of the subscriber.

Méridia Smart Energie will offer eco-coaching to users. More than a guide to good practices, our partner will support local stakeholders in reducing their consumption by offering eco-friendly actions and regular personalised challenges.

Top drivers for this project:

The top three drivers of the project are the following:

What were the top barriers, were they overcome, and if so - how?

What were the benefits in terms of efficiency and cost reduction?

What were the economic, social and environmental benefits?

Legislation and regulation to incentivise adoption

Different public stakeholders contributed to make this project a success: 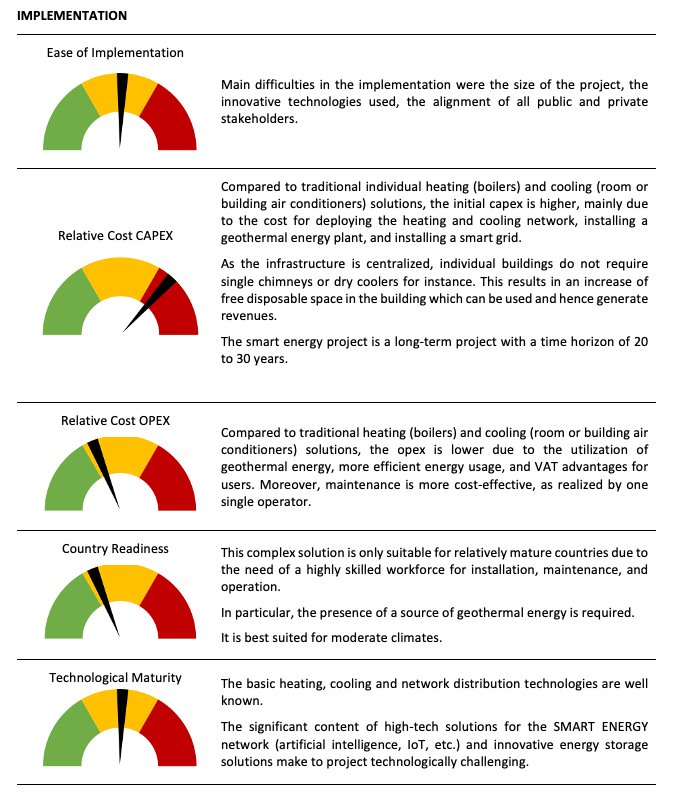 No risks, as the technology usage is not perceptible for the users beyond the reduction of their energy bill.

Geothermal energy is clean and the overall impact on the environment is highly positive.