Hyperloop is a proposed mode of ground transport for passenger and freight transportation which consists of pods transported at high speed, through the length of low-pressure tubes that are elevated off the ground, due to a lack of air resistance or friction. Hyperloop has the potential to travel at speeds in excess of 1125km/h (700mi/h) which would reduce travel times over medium-range distances (up to 1,500 kilometres (930 miles)).

The concept of using low-pressure or vacuum tubes as part of a transport system has a long heritage. The Crystal Palace pneumatic railway in London used air pressure to push a wagon uphill (and a vacuum to drag it back down) in 1864. The 'vactrain' developed by Robert Goddard in the early twentieth century is another predecessor to the Hyperloop. Since then, many similar ideas have been proposed. Interest in the concept was reignited by Elon Musk’s 'Hyperloop Alpha' paper published in August 2013, which explored how a modern system could work and how much it could cost.

Travel between cities is largely achieved today through road or rail travel or via air travel, which, though travelling at higher speeds, is problematic due to the additional travel time to/from airports, the need to arrive considerably in advance of departure time, security restrictions, and expense. Air travel is also susceptible to weather conditions, produces noise pollution and is a significant contributor to carbon emissions. Hyperloop is a potential alternative to travelling over medium distances between city centres, which combines the convenience of rail travel with the speed of air travel. It is proposed to be a cheaper and faster option to existing high-speed rail links that could revolutionise passenger and freight transport and supply chains.

Hyperloop is anticipated to be a fast and carbon-neutral way of connecting cities. Hyperloop systems are envisioned to run exclusively on renewable energies that would enable the system to generate more energy than it will consume. It has been proposed to install solar panels along the outside of the Hyperloop tube, which charge batteries storing energy for use at night.

Companies developing Hyperloop are also considering ways to build elevated tracks in major road medians and next to existing railway tracks to lessen the impact construction might have on ecosystems, natural spaces and people living nearby. Hyperloop could be built above or below ground. Building above ground is viable in regions where land is cheap and lacking in obstacles and dense communities, with tunnelling the more feasible option for more developed areas such as the UK, where it is challenging to clear densely built up areas.

Legislation and regulation: Hyperloop also presents a potential legislative challenge: Like autonomous vehicles, the uniqueness of this transport mode means much of the existing regulations and standards worldwide are not applicable to it and thus a new regulatory framework will need to be developed. Governments should collaborate with Hyperloop companies at the early stages of development to address the regulatory gap.

Effective institutions: Embedding hyperloop in strategic infrastructure planning would be necessary, and to do that, understanding the demand and the integration with other transport modes will be a prerequisite to implementing any regulations on its operational expectations.

Transition of workforce capabilities: Hyperloop operations and maintenance would require a whole new set of capabilities and the technologies of operations do not rely on any existing or operating systems. Appropriate training of operating staff will need to be made, such as on signalling and driving for example. Safety regulations and specific accreditations linked to the operating objectives of hyperloop should be anticipated and defined prior to the launch of any services.

Funding and financing: Funding for Hyperloop systems would probably be a combination of public and private investment. This is in order to continue to foster the innovation and research for improvement of the technology. It is also because most governments will be looking at sharing the risks with the private sector until the solution is proven to be efficient and to provide public benefits. 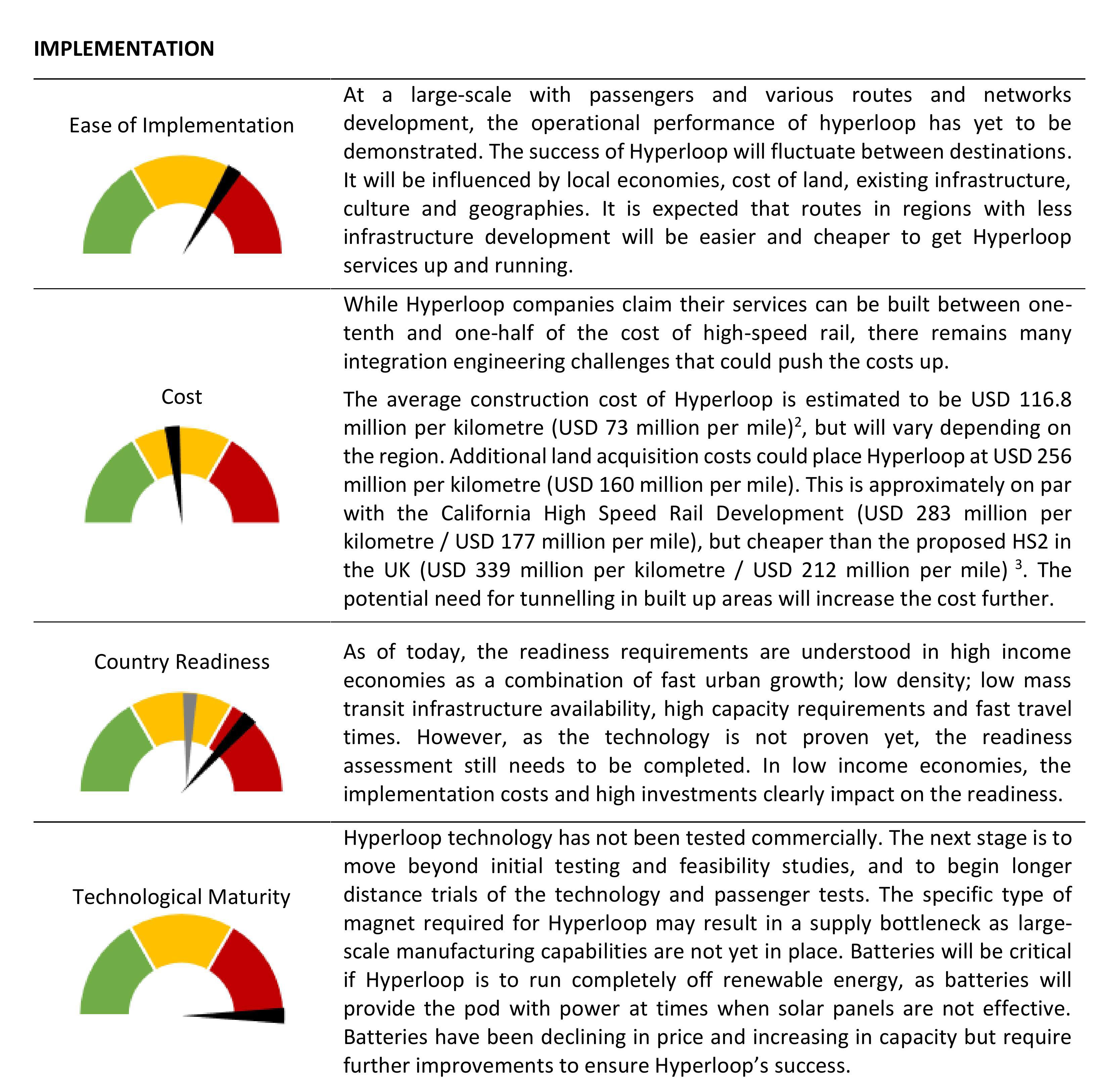 Risk: Critics have questioned Hyperloop’s potential capacity due to the small payloads associated with the pod design. To match the capacity of conventional metro systems, Hyperloop systems would require hundreds of pod departures every hour, leaving an approximate 9 second headway between pods.

Mitigation: Organizations need to consider how many tubes should be built to prevent limiting capacity. Governments should consider whether the system is able to compete with existing high capacity modes (e.g. Metro, High-Speed Rail) as well as other upcoming alternative technologies (see Supraways use case).

Risk: Critics of Hyperloop have argued that the extreme speeds may produce an uncomfortable riding experience for passengers due to G-forces and jostling. In addition, travelling in a concrete pipe in a windowless pod may not produce an enjoyable travel experience and may be too alien for passengers.

Mitigation: Hyperloop companies have theorised that travelling on Hyperloop will feel like travelling in an elevator or a passenger plane with gradual acceleration and deceleration. Developers will need to ensure travel is smooth and comfortable for passengers to ensure uptake. They should install personal entertainment systems and internal landscape imagery and/or mood lighting to create a more comfortable experience. Safety will also be a key factor in encouraging user adoption. Like in the aerospace industry, Hyperloop will need to effectively respond to incidents to improve safety over time and reassure potential customers.

Risk: The Hyperloop tube system could be vulnerable to terrorism or sabotage. Due to the raised or underground tube design, logistical questions will need to be considered regarding how operators will respond to common issues including equipment malfunction, accidents and emergency evacuations. Due to the high speed of travel there is a high risk to passenger safety if an accident occurs.

Mitigation: The aerospace and metro industries have faced similar safety issues and have had to improve tunnel and air travel safety over many decades. Hyperloop will have to go through a similar process. Hyperloop systems will also require comprehensive CCTV and other monitoring systems across their network and robust procedures to respond to potential emergent incidents.

Risk: The environmental impact of the construction of Hyperloop systems is high, given the infrastructure and level of energy and operations required. The offset of such impact is not yet fully modelled or understood.

Mitigation: Clear environmental impact assessments and models should be developed and performed with models showing the long-term sustainable value or offset of CO? emissions of Hyperloop.

Implementation: One of companies developing Hyperloop systems, with current projects underway in Missouri, Texas, Colorado, North Carolina, the Midwest, India, Saudi Arabia, and the UAE. The first hyperloop route in India will be built between Pune and Mumbai.

Implementation: HTT has signed a memorandum of understanding to build a Hyperloop between Vijayawada and Amaravati in India.