Core to any PPP project is the long-term contractual relationship between the government’s procuring authority and the private party (the project company). This is one of many relationships that will affect the success of a PPP.

Another crucial relationship is that with citizens—the end-users, local community and businesses, and civil society groups that will be affected by, or can influence the project.

Guidance is given in the GI Hub’s PPP Contract Management tool, Chapter 3.3 on stakeholder Management.

A key lesson from many of the case studies developed as part of the GI Hub PPP Contract Management tool is that the procuring authority should ensure that these stakeholders are engaged at all stages of infrastructure delivery.

Early stakeholder engagement can help ensure viability of the project and enhance the services, as well as reduce the risk of delays and disputes during implementation of the project.

Members of the local community will typically know the area well and may be able to contribute positively to project planning and enhance the value of the project.

For example, the I-495 Express Lanes project in the USA highlights that public engagement with key stakeholders can deliver a better project for the community and for the project sponsor.

Initial plans for the project included just one access point into the region’s largest employment centre. After early feedback from major employers, elected officials and transit advocates, the project team changed the scope of the project to include three major entry and exit points to serve the busy commercial area.

By engaging stakeholders early, the parties were able to develop an improved transportation solution.

Public stakeholder engagement can also provide opportunities to increase employment or to better serve otherwise underserved members of the community. For instance, the I-495 project was able to support local development as the procuring authority mandated that the project company utilise ‘Disadvantaged Business Enterprises’ where possible.

US $490 million was contracted to small and disadvantaged businesses. At the time, it was the largest contribution in Virginia’s history for such businesses from a single transportation project.

Transparency is one of the underlying principles of the relationship governing PPP procurement and delivery, and is also an important component of wider stakeholder engagement and promoting public acceptance of a project. A communication strategy and plan should be developed from day one.

The communication strategy should include an awareness campaign, regular progress updates, mitigation measures for any issues affecting end-users and/or the community, crisis communication procedures, clear protocols for responding to queries from the public and media enquiries, and a dedicated website for disseminating key controlled messages.

In our research, ‘environmental and social’ causes were reported as the largest category under cause of disputes 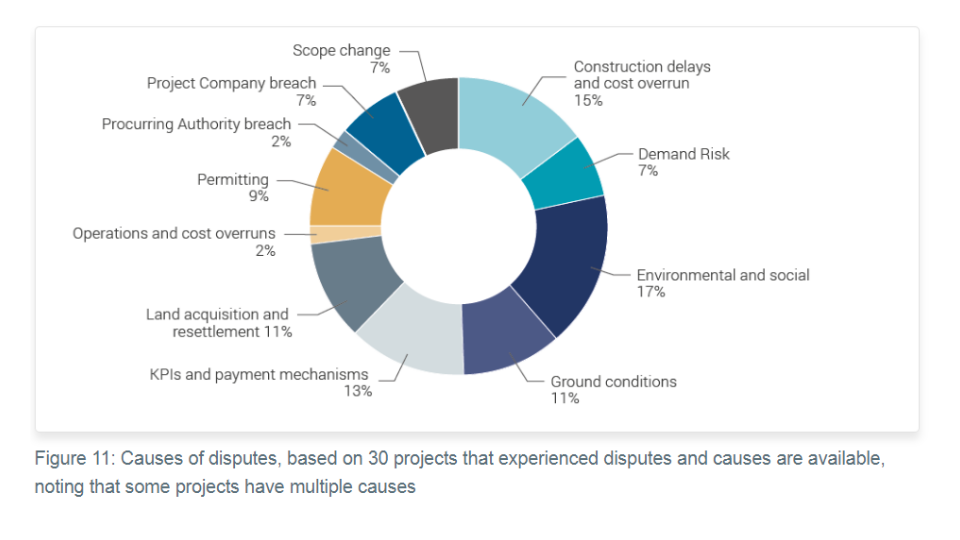 Stakeholder engagement can reduce negative public perception and social risks leading to delays and disputes on a project.

The Port of Miami tunnel project case study provides a good example of a project initiated when there was significant public criticism over recent large construction projects that were seen to disadvantage local residents.

One of the enablers of success for this project was the ongoing focus on community engagement carried out by the project company. The primary method in which local support was encouraged was through Operation 305 (referring to the local area code). This was a commitment to not just hire people from the local area, but also to source materials from local vendors.

The project company’s team also put a lot of emphasis on community outreach, as well as developing traffic management plans in association with local authorities to balance the demands of locals with those of the construction activities.

The Segarra Garrigues Irrigation project in Spain was affected by delays due to slow uptake of the development by the targeted end-users. Farmers were required to provide their own capital to connect to the water network. Uptake was limited until an improved stakeholder management plan was implemented.

Illustrating the diversity and different interests of public stakeholders—from potential end-users to environmental organisations—who should be consulted from an early stage, the project was also affected by a major change in scope to comply with environmental requirements to protect designated species of birds.

The Active stakeholder engagement can have an influence on whether the project becomes a useful backbone contributing to society and the economy, or an underutilised and disliked ‘white elephant’.

Stakeholder engagement can take time, but short-cutting leads to even longer delays at a later stage. And ultimately, it is fundamental to the economic rationale of any project that it has positive outcomes on society.

Blog
PPP contract management – Moving into operations, including managing KPIs and payment deductions
Disputes in public-private partnerships (PPPs) globally involving key performance indicators (KPIs) represent 20 per cent of all disputes, as highlighted in our data using a representative sample of projects from around the world.