Noor Ouarzazate I, a 160 MW Concentrated Solar Power (CSP) plant, is a path-breaking largescale CSP project, one of the first to be delivered in the Middle East and North Africa (MENA) region, taking advantage of the region’s abundant solar resources.

Noor Ouarzazate I is the first phase of a CSP complex exceeding 500 MW, also known as NOORo (“Noor” is Arabic for “light”, the “o” stands for Ouarzazate).

The CSP facility is located 10km outside the town of Ouarzazate in Morocco and approximately 200km south of Marrakech. Ouarzazate was chosen as the location of the solar complex because of the city’s excellent solar resources, the availability of water for cooling, its accessibility for heavy equipment, and the proximity to the power grid.

Noor Ouarzazate I was structured as a public-private partnership (PPP) on a Build, Own, Operate and Transfer (BOOT) basis, with the ACWA Power consortium announced as preferred proponent in September 2012. The PPP was supported by a Power Purchase Agreement (PPA) and a Power Sales Agreement (PSA), plus a significant amount of concessional finance provided by the Clean Technology Fund (CTF) and several International Financial Institutions (IFIs). The project would not have been a viable investment prospect without this concessional finance and the support of the Government of Morocco.

The PPA is a 25-year fixed term, fixed tariff agreement between the ACWA Power consortium and the Moroccan Agency for Sustainable Energy (MASEN). The tariff in this PPA was determined by the bidding process – i.e. the ACWA Power consortium was the bidder that proposed the lowest tariff. MASEN has also entered into a separate PSA with ONEE¹, the Office National de l’Electricité et de l’Eau Potable (National Office for Electricity and Potable Water), in which ONEE will buy all power from MASEN at a tariff approximately matching the grid price, and dispatch it from the plant. The difference between the tariff in the PPA and the price in the PSA will be covered by subsidies from the Government of Morocco and an operational support loan from the World Bank (via the International Bank for Reconstruction and Development (IBRD)).

The ACWA Power consortium is responsible for project implementation, including design, construction, and performance optimisation of the plant. The construction period was 30 months (including a test period), with 25 years of operation. The project uses parabolic trough CSP technology, the most widely deployed CSP technology, and the plant has capacity of 160MW, with three hours of thermal energy storage capacity to supply electricity at night or during peak demand. The plant commenced power production in December 2015 and the project was inaugurated by the King of Morocco in February 2016.

The Government of Morocco is an early mover in implementing CSP technology on a large scale, and the project could have significant implications for the development of the technology, and the renewable energy mix, in the MENA region. Some of the project highlights are:

Morocco’s energy needs far exceed its oil and gas production. In recent years, Morocco has imported 95% of its energy as fossil fuels, providing subsidies on these fuels at a cost in the range of USD 1-4 billion per year. Its demand for primary energy continues to grow, increasing by an average of at least 7.2% between 2002 and 2012. To meet economic growth and industrial development, this demand is expected to triple by 2030 and electricity consumption is expected to quadruple.

The MSP aims to take advantage of the region’s abundant solar resources² and install a minimum of 2000 MW of solar capacity by 2020, contributing to approximately 14% of the energy mix in Morocco’s electricity supply.

Further phases of the NOORo solar complex are under construction with commissioning expected in 2018. These include:

One of the key challenges of the Noor Ouarzazate I project was to reduce the gap between the tariff paid under the PPA and the tariff paid under the PSA, to the greatest extent possible. To that end, MASEN sought to optimise every aspect of the project. MASEN streamlined the overall procurement process and clearly defined the risk allocation reflected in the contractual documents, in addition to de-risking the project profile and hence reducing the risk premium embedded in the tariff. This gap is expected to continue to decrease in future projects under the MSP, as is already the case with the Noor Ouarzazate II and Noor Ouarzazate III projects.

It should also be noted that Noor Ouarzazate I and the other projects of the MSP are expected to create significant local and national industrial benefits. Noor Ouarzazate I, combined with its second and third phases, is expected to contribute substantially to local economic development by building up the local supply industries, and through the creation of jobs in construction, manufacturing, and operations and maintenance. For each project under the MSP, MASEN will encourage the use of local staff and materials, and is aiming for a minimum of 30% of the plant capital costs to include local content, in order to help stimulate the private sector and create jobs. The final decision to include local content in the NOORo projects was entirely voluntary and based on the selected bidder’s proposal, at their full discretion.

Key dates in the Noor Ouarzazate I procurement timeline are shown below:

The diagram below illustrates the main contractual components of the project. 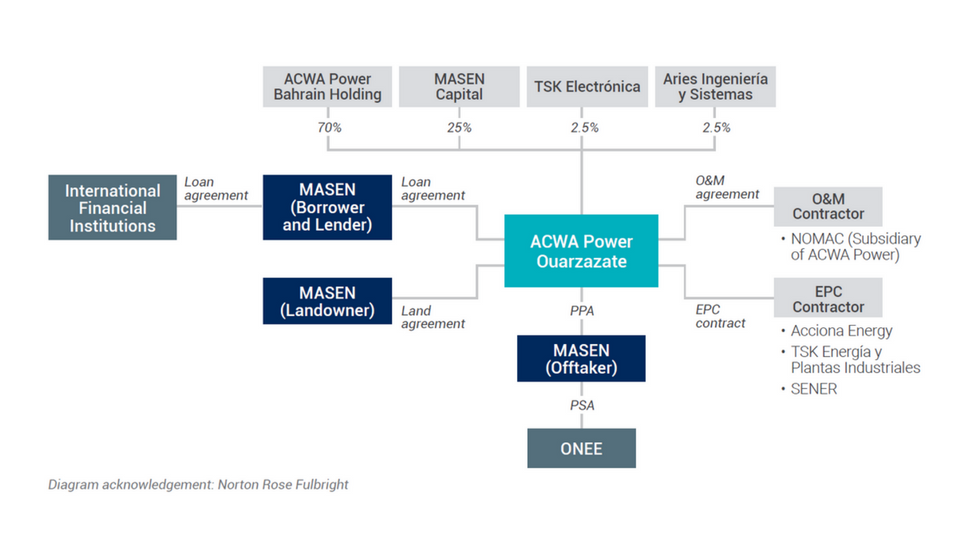 The sources of financing and funding were both critical to the viability of the project.

The total investment cost of the project was USD 846 million, which was financed through a combination of debt (80%) and equity (20%). MASEN also received grants from the European Commission (via the Neighbourhood Investment Facility) and Kreditanstalt für Wiederaufbau (KfW) to finance its equity stake in the project.

After the ACWA Power consortium was selected as the winning bidder, the final bid on project costs was 25% lower than the initial projections³. The final bid also revealed that less equity and debt were required to finance the project than had been anticipated, due to the risk mitigation scheme which includes: completion guarantees by the sponsor/EPC contractor, an equity sell-back option for MASEN, and an optimum risk allocation between public and private sectors, where the public sector assumes political, financial and commercial risks, while the private sector assumes construction and performance risks.

The debt portion of the financing was provided by Bilateral Development Financing Agencies (DFIs) and International Financial Institutions (IFIs). The DFIs and IFIs provided almost USD 670 million in debt financing to MASEN, with tenors ranging from 15 to 40 years, as well as necessary institutional and specialised technical support and some non-repayable grants. MASEN, in turn, on-lent the DFI/IFI loans through a facility agreement to the project company, with a tenor reflecting a blend of the terms and conditions of the DFI/IFI loans.

The European Investment Bank (EIB), African Development Bank (AfDB), Agence Française de Développement (AFD), KfW (on behalf of BMZ, the German Federal Ministry for Economic Cooperation and Development), and the Clean Technology Fund (via the AfDB and IBRD) provided loans to MASEN to finance the debt of the project.

The financing sources for the project, including the debt financing, equity contributions and grants, are listed below. 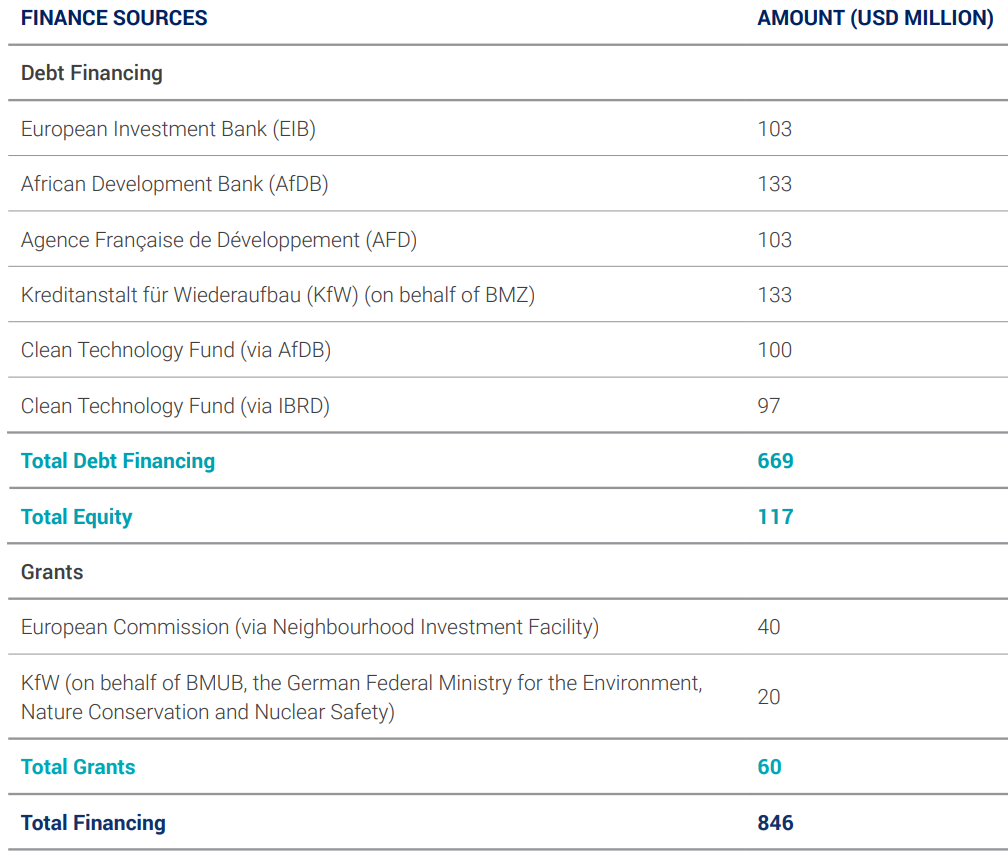 The primary source of funding for the project is the guaranteed tariff revenue stream provided to the ACWA Power consortium under its PPA with MASEN. The price subsidy from the Government of Morocco’s State budget, and the World Bank (IBRD) low-interest rate loan designated as the Solar Incremental Cost Support (SICS), will be used to fund the viability gap i.e. the price differential between (i) the tariff that MASEN will pay to the project company, and (ii) the amounts that MASEN will receive from ONEE as the final off-taker. The difference in the price is largely due to the amortisation of the high capital costs of CSP technology.

The funding subsidy sources for the project are listed below.

CSP technology is still not yet competitive with conventional generation alternatives, given its relatively high capital costs. Although it has the potential to become competitive in the short- to medium-term, it is currently more expensive than fossil fuel-based energy generation (even if fossil fuel subsidies are removed). At the time Noor Ouarzazate I was under procurement, the gap between CSP and less expensive carbon-intensive energy alternatives was particularly evident in markets, such as Morocco, where large fossil fuel subsidies heavily distort domestic energy prices. Thus, this project required a unique blend of public subsidy and risk mitigation instruments to attract private investors.

The technology also has a three-hour molten salt thermal energy storage capacity, allowing it to operate at full capacity for three hours without sunlight (after sunset or during cloudy weather), and to supply electricity to the grid at night or during peak demand. Thus, the facility will help cover the demand for electricity at peak hours that occur in Morocco between 5pm and 10.30pm in winter, and 6pm and 11.30pm in summer.

Along with the Government of Morocco’s commitment to fund the substantial viability gap of the project, it also established a favourable regulatory and renewable policy framework to encourage private-sector engagement, in line with its clear and ambitious development targets for renewable energy sources.

The Government of Morocco established MASEN, the Moroccan Agency for Sustainable Energy, in 2010, with a mission to promote the widespread adoption of solar, wind and hydro resources. Through integrated and well-structured projects, MASEN aims to:

i) endow the country with a competitive industrial network to create added-value and employment;

iv) contribute to local development around the projects.

MASEN is a limited liability company, which is publicly-owned but governed by private law. It is owned by the Government of Morocco, ONEE, the Hassan II Fund for Economic and Social Development, and the Société d’Investissements Énergétiques (SIE), each with 25% stakes. MASEN is responsible for the feasibility assessment, design, development, and financing of solar projects in Morocco on a case-by-case basis, along with contributing to expertise and research in the solar industry.

In this project, MASEN plays the role of offtaker in the PPA, and of seller of the electricity generated in the PSA. The agreement between the Government and MASEN provides certainty that the viability gap will be covered, and the agreement between MASEN and ONEE guarantees connection to the grid and full dispatch of electricity. MASEN is also an equity partner in the project company along with the winning bidders, which is governed by a shareholder agreement. This includes a ‘put option’, allowing MASEN to sell back its share if the private partner defaults on specified construction or performance obligations. MASEN also acts as sole lender, mobilising concessional financing provided by AFD, KfW, the Clean Technology Fund, the AfDB and the EIB, repackaging it and on-lending it through a single line of credit to the project company. During the construction phase, MASEN provided finance and managed the associated facilities (for water supply, grid connections and land). At the end of the PPA, MASEN will obtain full ownership of the CSP plant.

The following chart shows the multiple roles played by MASEN in the Noor Ouarzazate I project: 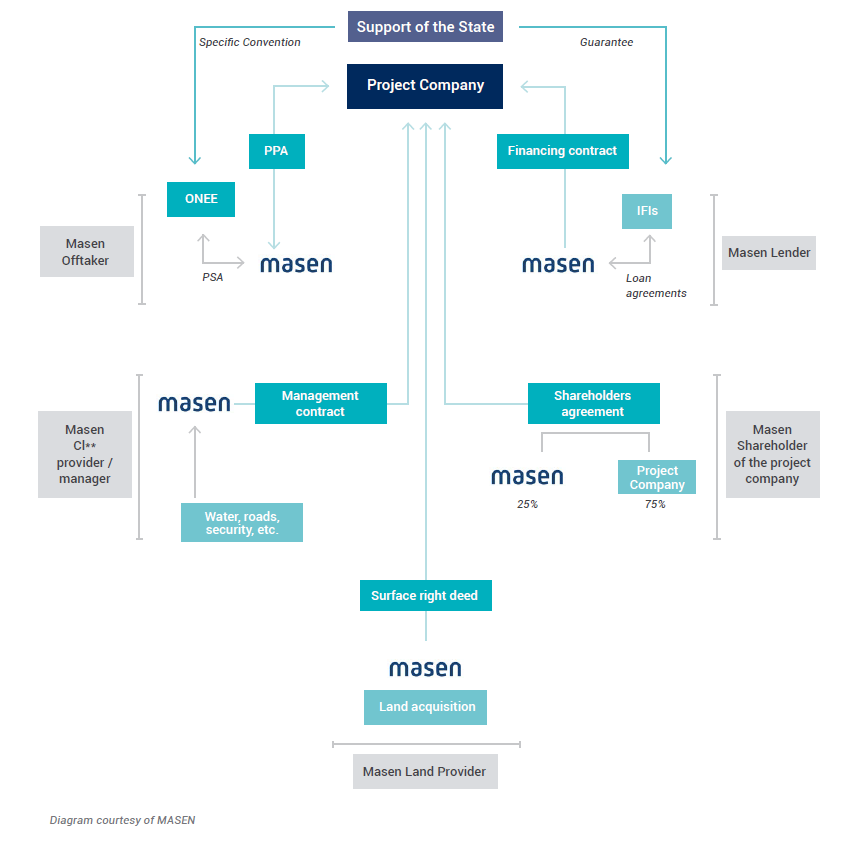 Additional details on the Ouarzazate I CSP Plant can be found at:

2. Solar radiation intensity in Morocco is extraordinarily high, reaching more than 2500 kWh per m² per year.

4. The loan amount of USD 300 million will provide subsidy support for the entire NOORo Complex (encompassing Ouarzazate I, II and III projects). 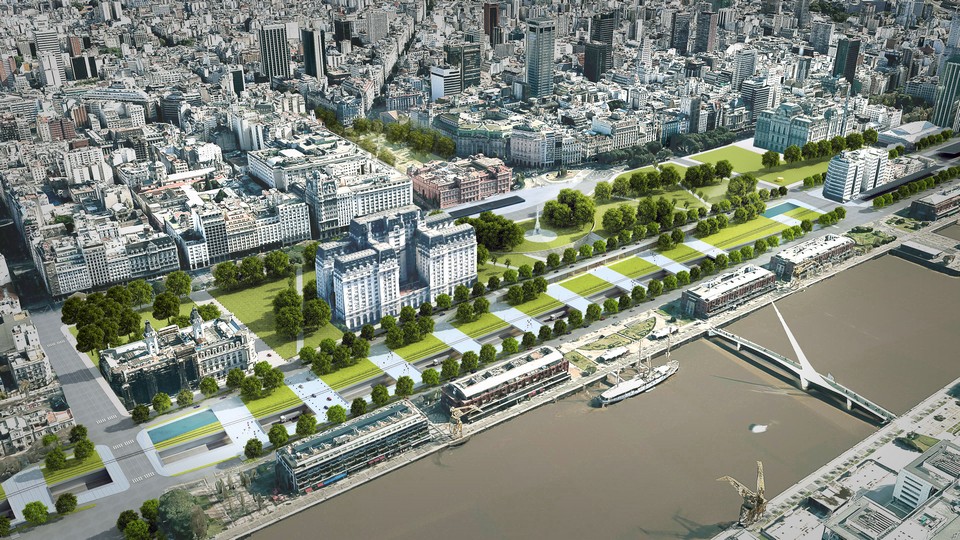 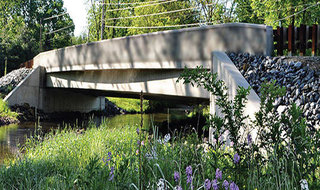