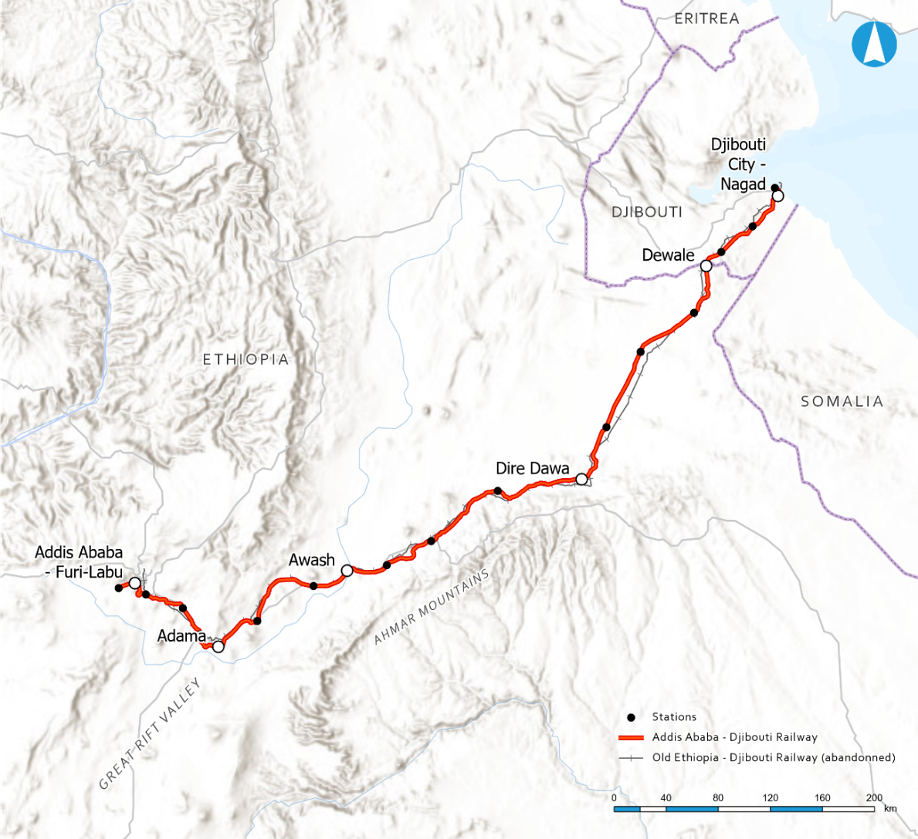 The Addis Ababa–Djibouti Railway modernisation project is the first cross-border electrified railway in Africa. The railway line is a 753 km electrified single-track standard gauge line between Ethiopia´s capital Addis Ababa and the Port of Djibouti, with 45 stations in total. The new standard gauge line runs parallel to and replaces an abandoned 1 m gauge railway, which was built more than 100 years ago.

As a landlocked country, the line serves as the main transport corridor for Ethiopia to its gateway of the Port of Djibouti, which handles over 90% of Ethiopia’s international trade. The line runs from Addis Ababa/Sebeta through the two large Ethiopian cities of Adama and Dire Dawa and links industrial parks and dry ports.

The railway line is owned by the EDR, a joint venture company of the two state-owned companies the ERC and SDCF.

The project was constructed by Chinese state-owned companies CREC and CCECC, which are operating the railway for a period of six years following construction completion. The line was opened for freight in October 2015 and was formally inaugurated for passenger services in October 2016. It became officially commercially operational as of 1 January 2018.

The project is part of China’s Belt and Road Initiative and the first overseas railway constructed by Chinese enterprises with complete adoption of international standards (1,435 mm gauge line and electrification at 25 kV), and Chinese equipment (CSR Zhuzhou for the rolling stock).

This case study was drafted based primarily on a literature review and interviews with representatives from the Addis Ababa Institute of Technology (AAiT) and the ERC.

Ethiopia became a landlocked country following Eritrea’s independence in 1993, which constrained Ethiopia’s trade. Consequently, in the early 2000s, the Port of Djibouti became Ethiopia’s main port and a gateway for over 90% of its international trade.

Investments in road and rail along the Djibouti corridor had the potential to significantly reduce transport costs and time. They were a key element encouraging greater interest from investors in developing manufacturing export capabilities in Ethiopia.

In the 1990s, Chinese corporations started to invest in African countries. In recent years, through the Belt and Road Initiative, China has sought to strengthen its trade routes and foreign investments in other continents and has provided strong political support for investment in Africa. The Addis Ababa–Djibouti Railway is part of this investment strategy.

In 2007, a TAG was established under the Ethiopian Ministry of Transport to define a framework for the development of a railway corridor. This included a pre-feasibility study on socio-economic and macro-economic benefits, and a detailed corridor analysis. The TAG recommended the introduction of a railway system throughout Ethiopia as the primary national mass transportation system. The study emphasised the importance of modernisation and expansion of the existing 1 m gauge (1,000 mm) railway to a standard gauge (1,435 mm) line to provide faster access to the Port of Djibouti from inland Ethiopia. In the sameyear, the Council of Ministers established the ERC by regulation No. 141/2007 to develop the railway infrastructure and provide freight and passenger transport services in Ethiopia.

In June 2010, the Transport Ministers of both countries signed an MoU in Djibouti on the Development and Operation of a Standard Gauge Railway Line between Ethiopia and Djibouti. The Ethiopian Government subsequently adopted its five-year GTP to achieve economic structural transformation and sustainable accelerated growth towards Ethiopia’s longer-term vision of being a middle-income country by 2020–2023. The GTP included the development of dry ports, rail and road networks, and air transport. It aimed to develop the standard gauge railway line for Ethiopia and Djibouti and a 34 km light rail system for Addis Ababa as priority projects.

Since 2010, Ethiopia has been striving to build an extensive rail network in line with the GTP. Railway transport services are regulated through a series of bilateral agreements to:

Challenges and opportunities addressed by the project

Before the modernisation of the Addis Ababa–Djibouti Railway, Ethiopia and Djibouti were connected through a 780 km railway corridor via Dire Dawa, which was built in 1917.

This 1,000 mm gauge railway was the only railway line between the two countries, but it deteriorated due to lack of maintenance and management.

As the majority of goods to and from the Port of Djibouti were carried by road, the transport and trade costs for landlocked Ethiopia were prohibitively high compared with other African countries. A low-quality and costly logistics system hindered Ethiopia’s efforts to achieve growth through export-orientated industrialisation. Ethiopia’s economy is based on agriculture and, due to the lack of fundamental industrial and manufacturing bases, its social and economic development mostly relies on international trade. In total, 80% of the goods imported via the Port of Djibouti are destined for Ethiopian central regions. The new railway line is, thus, an enabler of Ethiopia´s sustainable social and economic development.

Djibouti is one of the smallest countries in Africa and its economy heavily depends on international trade. Benefitting from its strategic location at the Red Sea gateway bridge between Africa and the Middle East, Djibouti´s economy is driven by port services in the import of food grain and all industrial products.

The railway improves the inland transport connection of the port to provide a fast, high-capacity collection and distribution corridor for the Port of Djibouti.

Trade through the port is expected to grow in parallel with the expanding economy of its major trading partner Ethiopia. Also, the project will have a positive impact on the main areas along the route and facilitate the development of Djibouti´s port services industry and economy.

Still, construction of the new railway line is technically very demanding and requires equipment that can withstand the region´s adverse natural conditions.

The line runs through different climate zones, with huge day-night and seasonal temperature differences, including the 2,300 m altitude in Addis Ababa, and up to 50° Celsius temperatures in the Danakil Desert.

The new railway is expected to bring considerable advantages for long-haul transport of freight, including massively reduced travel times, from up to 50 hours down to 10 hours. On the cost side, the temporary passengers and freight tariffs adopted by the two governments are very competitive compared to road transport (USD0.017 per passenger-km, an import rate of USD0.046 per ton-km and an export rate of USD0.023 per ton-km,) giving the railway a competitive cost advantage.

The new railway line boosts the performance of the international trade corridor and significantly contributes to strengthened economic ties between the two countries. For Ethiopia, it helps accomplish its strategic goal of sustainable and stable economic development towards a middle-income country, with an annual GDP growth of 8.3% in 2019 and the target of an average GDP growth of 11% annually. For Djibouti, the better and more competitive railway service supports port and transit cargo operations, which are essential sources of income and employment for the country. The annual GDP growth for Djibouti is 5.9%, driven by public investment in rail and port infrastructure. In 2019, the service sector, of which transport forms the largest component, accounted for 76% of GDP.

The line, designed as Ethiopia’s main transport corridor, strengthens development opportunities for rural communities. New railway stations built on the outskirts of the urban settlements require, however, further investments to connect them to city centres and other interchange nodes by means of public transport. A strategic Transport Master Plan for Addis Ababa, currently under preparation, addresses the issues of integrated transport and urban development.

The transfer of knowledge from the project development and first years of operation will benefit job creation in the local communities.

As part of the investment propositions, the two engaged Chinese enterprises committed themselves to training local personnel to operate and maintain the railway. More than 300 employees of the ERC were sent to technical universities and schools in Beijing, Tianjin and Chengdu to further their professional knowledge of railway engineering, train driving and track maintenance. In addition, they provided regular training to promote compatibility of the working culture between both parties. Upon completion of the project, approximately 2,000 local workers were hired for infrastructure and rolling stock maintenance.

In 2011, the ERC awarded an EPC (engineering, procurement and construction) contract for the railway line from Addis Ababa to the Port of Djibouti to two Chinese state-owned companies, CREC and CCECC.

In 2012, the governments of Ethiopia and Djibouti signed a bilateral agreement for the development and operation of the standard gauge network. In 2016, the two governments agreed on the development, operation and management of the railway network. ERC and Djibouti´s Minister of Equipment and Transport signed commercial contracts with CREC and CCECC respectively. In the same year CREC and CCECC formed a consortium to operate the entire railway line for six years.

In October 2016 in Ethiopia and in January 2017 in Djibouti, the passenger railway services were opened. The official commercial operation commenced in January 2018.

The Governments of Ethiopia and Djibouti altogether financed 30% of the project and currently own the railway assets. The other 70% of the project cost was financed through concessional loans from China’s Exim Bank (Eximbank), the China Development Bank, and the Industrial and Commercial Bank of China. These loans were supported by market capitalisation of nearly USD3.3 billion. The Governments of Ethiopia and Djibouti have both purchased credit guarantee insurance for their loans.

The project has faced some financial risks, associated with lower traffic volumes than predicted in the transport forecast and currency exchange rate fluctuations – as the project’s debt was structured in US dollars, while construction and operation cost as well as revenues were granted in Ethiopian Birr.

In response to some repayment risks, the Chinese banks restructured the Ethiopian debt and extended the repayment period from 15 to 30 years.

Project supervision and control functions on behalf of the Governments of Ethiopia and Djibouti are performed by a Joint Railway Commission of the two state-owned companies ERC and SDCF.

CREC and CCECC are to operate and maintain the railway for six years from the launch of operation and will provide two additional years of technical support during the gradual handover of management duties to EDR from 2024.

The Bilateral Agreement signed on 16 December 2016 between the two governments established EDR, with shareholdings divided between Ethiopia (75%) and Djibouti (25%). Its main purpose is to manage the Addis Ababa–Djibouti Railway (including the maintenance and renewal of all infrastructure and equipment) and to operate freight and passenger transport services on the line from 2024.

Harmonisation of rules and standards

The new line is the first electric railway run completely according to China’s railway standards, based on the Chinese railway class standards for National Railway Class II. These are:

Ethiopia’s dedication to large-scale infrastructure projects, such as dams, industrial parks, mass housing and railways, has delivered impressive economic growth in recent years. But it has also kindled political tensions. In 2014, thousands of farmers and ethnic tribes complained that they had not been treated fairly by the ERC due to unfair compensation for land acquisition. The lack of serious public participation of local communities and nomadic tribes led to rent-seeking practices, such as compensation for owners of cattle and camels killed by trains. The level of compensation is at the discretion of the operator; the level of compensation payment has no statutory basis.